Like a groom’s speech at a wedding, this could turn into a series of thank yous.  Apologies in advance.

Walk first.  From Dinas Cross, today’s final stretch of 52 came down into the lovely harbour town of Fishguard, then across the Pen Caer community to the coast at a beautiful bay called Pwll Deri (just west of the village of Trefasser). 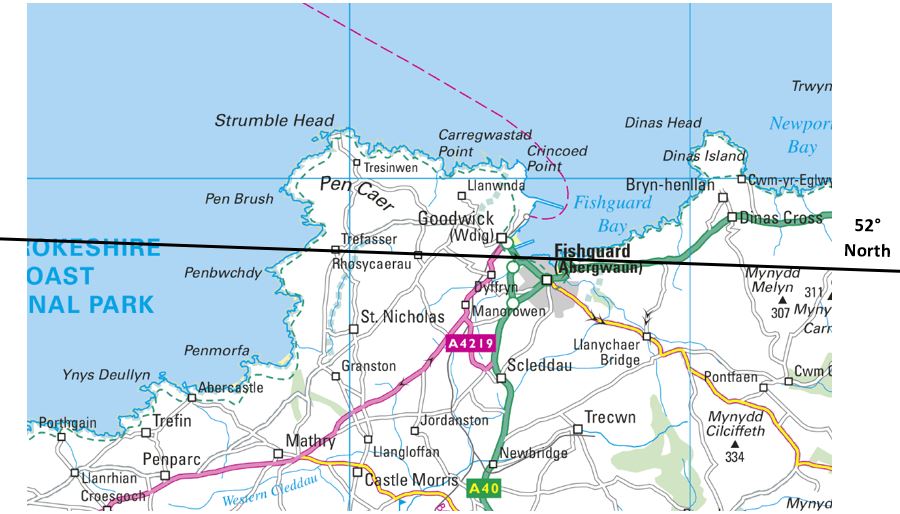 But it was raining.  Oh, was it raining!

I really can’t complain, though, as, out of 32 days walking, this was only the third day of wet weather (the others were Tewkesbury and Sennybridge).  Less than 10%.  Not bad.

Again, I was joined by Ffion, Tom and Steve (see yesterday’s update), and also by Roger too.  Ffion, Tom and Steve thus equalled my niece Hannah’s record of walking with me for two whole consecutive days.  Back in Bedfordshire my brother David also pretty much walked two days (although the first one was fairly short), plus he came back and did a bit more in Gloucestershire – so maybe he wins?

Anyway, we decided to press on despite the weather, and soon hit the heather and gorse bordered coast path, east of Fishguard. 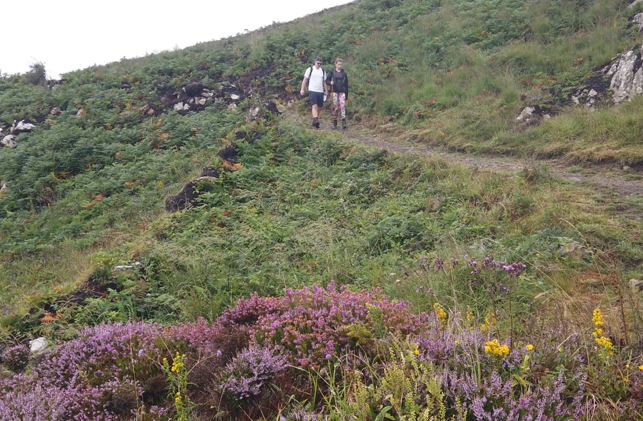 As we approached Fishguard, though, the heavens opened.

I’m such a wuss, I wanted to stop the walk and postpone the finish to the next day.  But Roger said something that struck me powerfully: “I don’t want to go back to the farm yet”.

Embedded in that remark is the reality of Roger’s and Moira’s daily life, which I find truly humbling.  They get up at 04:40 every day for milking, seven days a week, no weekends, no bank holidays, and have done so pretty much every day for 25 years.  Plus afternoon / early evening milking every day as well.  I find this unflinching commitment to the farm unbelievably inspiring.  I feel I should never moan again about having to get up for work.

People have said I’ve been working quite hard on this blog alongside the walk, but frankly it is nothing compared to my farming friends.  As I say, truly humbling.

So I was determined Roger was going to have his rare day out, rain or shine, so we continued.  And, what do you know?: with his farmer’s intuition Roger correctly foresaw that the weather would improve.

(You’d’ve thought, after six weeks, that I might’ve learnt how to smile in a selfie!)

So, I had crossed six whole degrees of longitude, from 1°E to 5°W.  All I needed to do now was repeat this fifty-nine times and I would have circumnavigated the planet at this latitude.  (Plus get a boat, of course, that I could also drag across Ireland, Canada, Asia and Europe!)

Let’s get to the end then.

In blowy wind we could see ahead to a rocky volcanic outcrop known as Garn Fawr at the coast.  It can actually be seen for miles around, including from Roger’s and Moira’s farm. 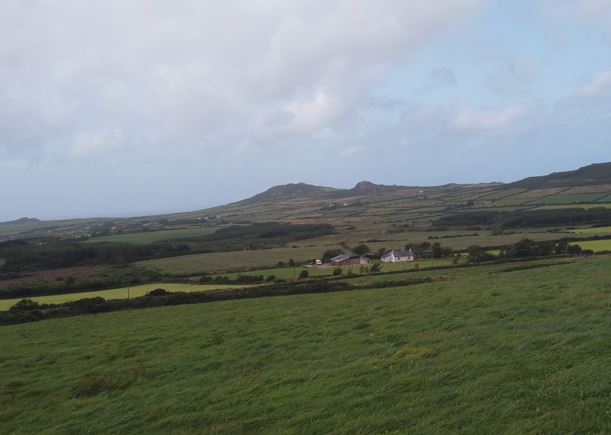 We crossed the last few miles rapidly and began the ascent of Garn Fawr.  The view is again spectacular, which is probably why it was used as another Iron Age fort.  It looks down to the bay called Pwll Deri, which is an epic seascape looking west to St David’s Head and out across the Irish Sea, immortalised by poet Dewi Emrys. 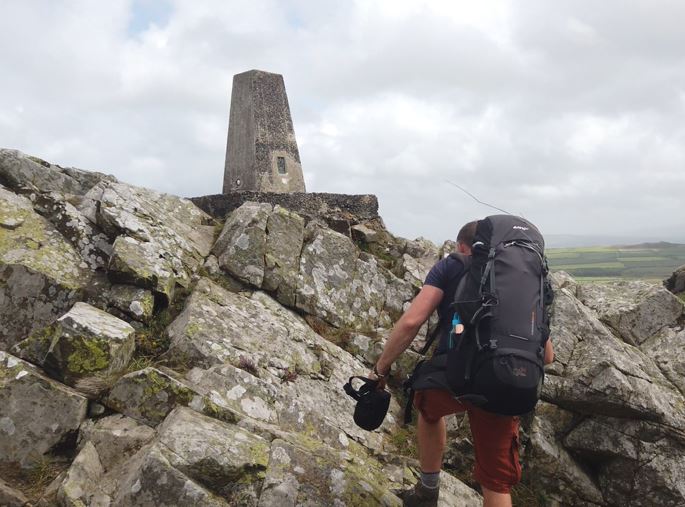 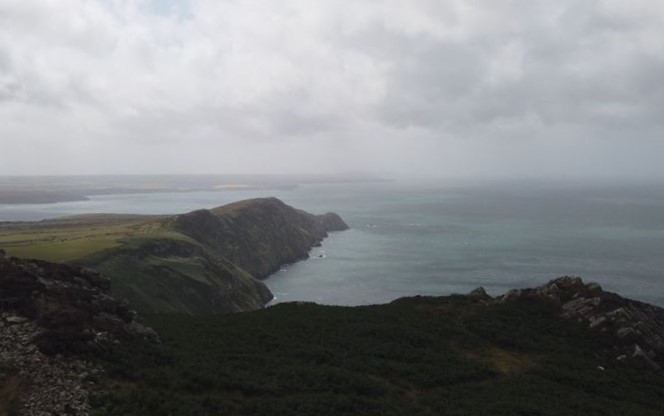 We were marking the end of the walk with a weekend stay, with Wokingham friends, at Pwll Deri Youth Hostel.  Helen and Laura were already there to welcome us as we came down from Garn Fawr, which was really lovely.

The 52nd parallel actually leaves Britain on a cliff edge, so it wasn’t possible to get to the sea at exactly 52°N.

One success over Suffolk though (where I failed to film the sunrise): I did manage to film the Pembrokeshire sunset.  I wanted to film this as an ending for the Week 6 Highlights Video which you can watch here.  (Strongly recommend full screen, headphones and volume if possible.)

Well first of all, I feel embarrassed at how much I’ve had to leave out.  These daily updates are a mere fraction of what I could (or perhaps should?) have written.  Our land is so rich in history and detail, across so many topics.  There’s a lifetime of interest here.  Many lifetimes.

There were so many ideas I wanted to reflect on but never did: changing agriculture and architecture across Britain; the natural world (I said virtually nothing about wildlife – sorry); history of transport (all the Roman roads and disused railways I crossed).  Really, I don’t know what I’ve been up to.

I do want to thank all the inspiring folk I’ve met at all the amazing places each day:

To all these folk: you have shown me bucketsful of positivity and hope for the future, as have all my landlords and landladies at all the B&Bs.  Thank you all.

One thing, or one person, I did want to mention is Postie. 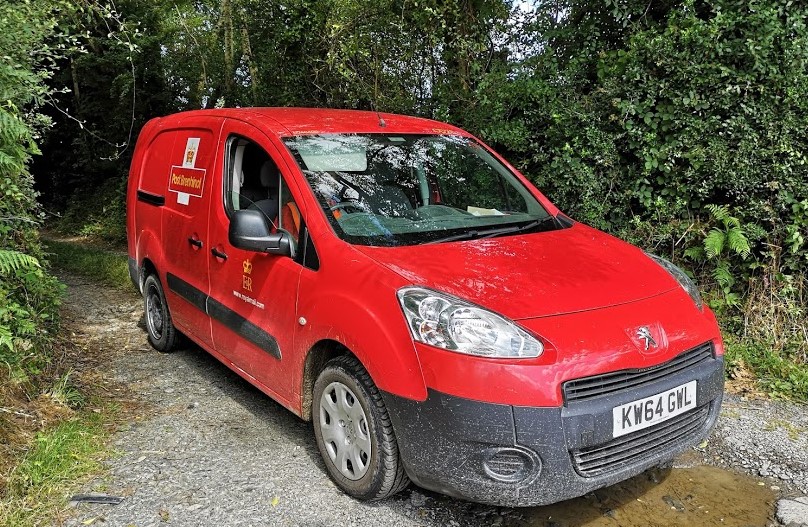 Right across the country, almost every day, I would see Postie driving his red van, delivering precious letters and parcels to folk all over Britain.

It wasn’t the same person each day, of course.  But it did make me think: how lucky we are to have a national postal organisation, delivering locally to the remotest parts of our land.

From a number of conversations I’ve had on 52, having a national (or international) structure, but with local delivery, seems to be an optimum model for how we should be living sustainably.  Lots more to think about on this, while Postie heads off on his way. 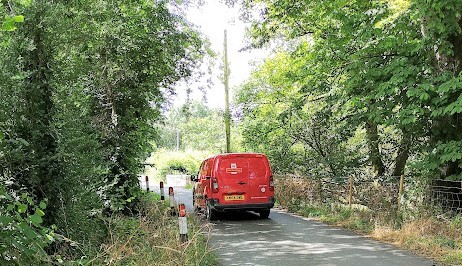 The other national, yet local, community which has been really supportive is BBC local radio.  They’ve been really happy to talk to me about the walk right across the country, which is why I’ve included a special thank you to them at the end of the Week 6 Video.

A few people have asked how far I’ve walked.  I honestly don’t know.  I didn’t measure it because I wanted the focus to be on the amazing places and not on the walk.  I don’t really believe the step count on my phone (I think it overcounts), but it says that, in total across the 32 walking days, I walked approximately 1,235,000 steps.  So a daily average of 38,500.

I certainly found hope and positivity on 52, but a few other words stuck out for me consistently on the walk:

– passion, commitment & resilience: I met many people who not only had genuine and strong interests, but they put them to work, and kept going in the face of challenge.  (I include in this group you, dear readers – thank you so much for persisting with these ramblings.)

– generosity: people also give very willingly, both their time (I saw so much volunteer time freely given) and their money (for example to my three chosen charities – thank you to all who have donated, and to the charities themselves who have also been really supportive).

– community: I saw the unstoppable power of people working together towards a common aim.  Linked to this is a question of scale that I want to reflect on further.  As mentioned above in relation to Postie, “small and local” communities seem to operate well, and yet small and local feels at odds with much of our modern life and society (which often feels global and vast).  Lots of food for thought.

– friends & family: these are two specific communities which have been incredibly supportive.  Friends and family members have really got behind the whole notion of 52, often going out of their way to walk with me, and giving lovely feedback on the blogs and videos which has really kept me going.

Two examples of this love and support: look at this banner made by some of my young Wokingham friends: 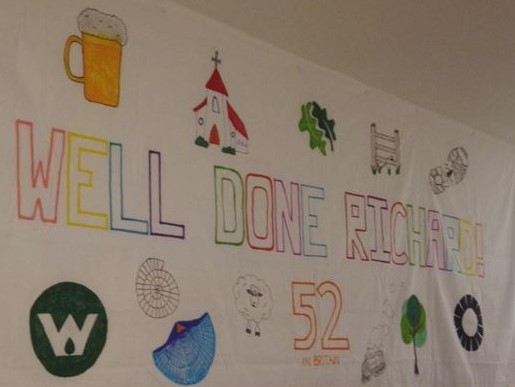 And this beautiful word cloud map, made by Bethan & Steve, which beautifully summarises all the positivity to be found in Britain: 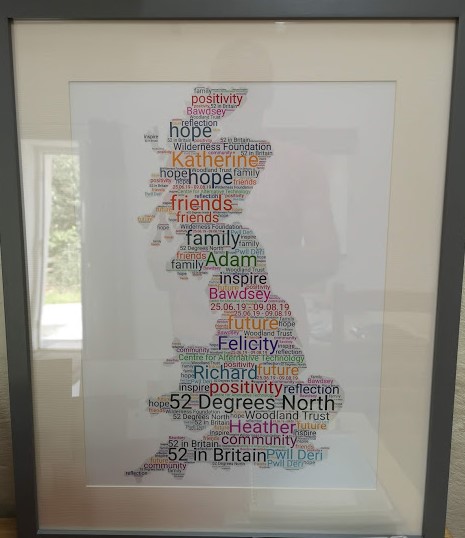 It’s been a real privilege to spend six weeks walking across a random cross section of the country in the summer of 2019.  Whatever challenges tomorrow brings, right across our beautiful land I found positivity and hope for the future, and this has truly made me feel extremely lucky to be “52 in Britain”.