After today, I love Bedfordshire folk.  Here’s why.

07:00
Phone: “Ping, ping, ping” – Various different people saying they liked the week 1 video.
(If you’ve watched the video you’ll know by now that Dan Mountain is a genius – more on him later.  Thanks so much for the feedback – it’s a real motivator to work hard on week 2.)

07:50
Text from Phill (the youngest of Heather’s four brothers): “Am thinking of riding [by motorbike] up to see you today.  Do you know where you’ll be around 13:00?”

Richard: “Shall we aim for Shillington?”

07:51
Messenger message from Katherine (daughter): “We decided at the last minute to go to Wimbledon today.  We’re going to try and recreate the photo of mummy there in 2012.” 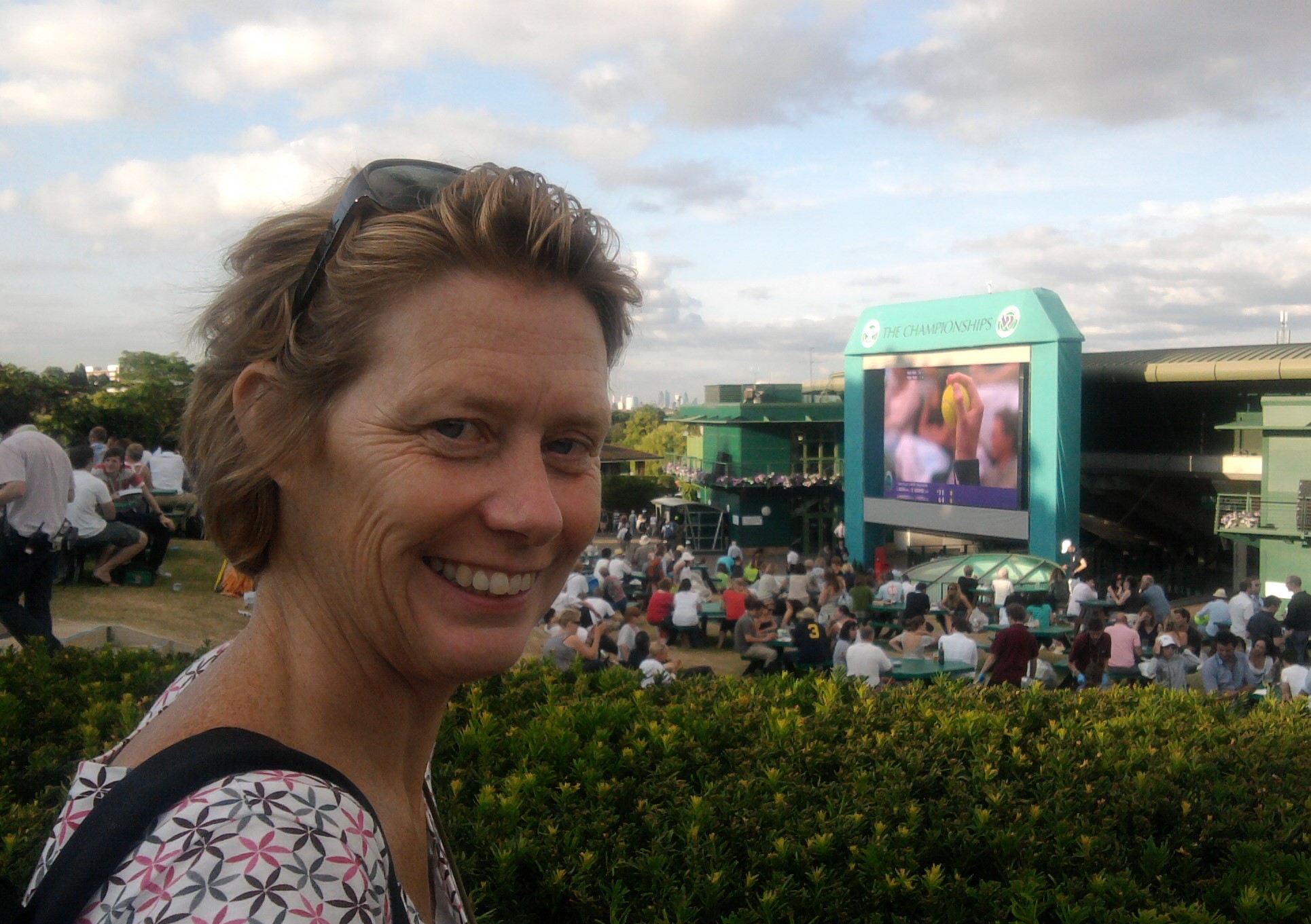 08:30
Head out on quite a long day’s walk to Flitwick, slightly later than planned, due to pinging.

10:00
Walk around the north of Letchworth Garden City, then cross into Bedfordshire. 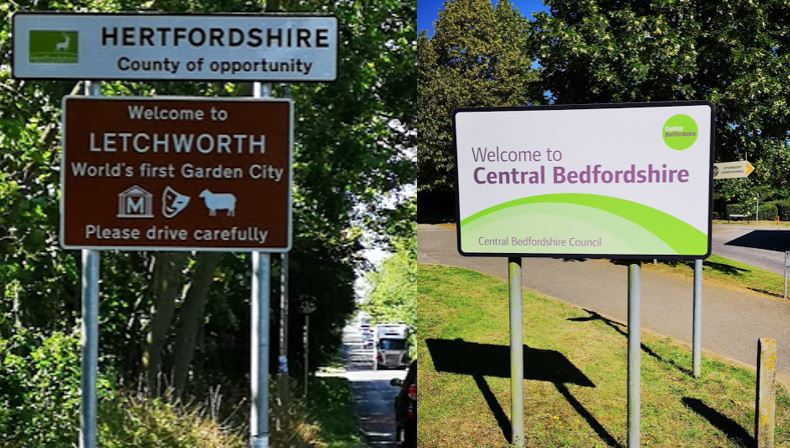 10:15
Walk through rather nice Crest Nicholson development in the grounds of Fairfield Hall, a former psychiatric hospital, now converted to flats with a Duncan Bannatyne health club.  (I’m now in much more built up territory – big contrast to rural Suffolk last week.) 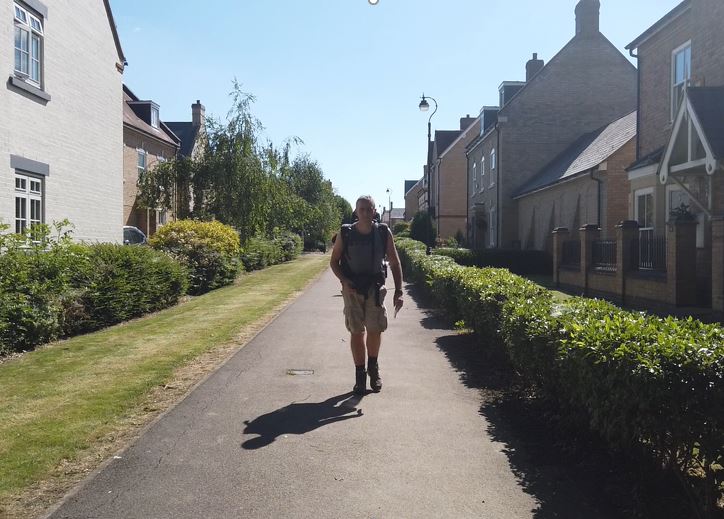 11:15
A little worried about getting to Shillington by 13:00, cheekily cut through a construction site (more houses), saving myself about an hour’s detour.  (Could hardly understand the Irish accents of the guys on the gate, but they knew about Fishguard and the boat to County Wexford.) 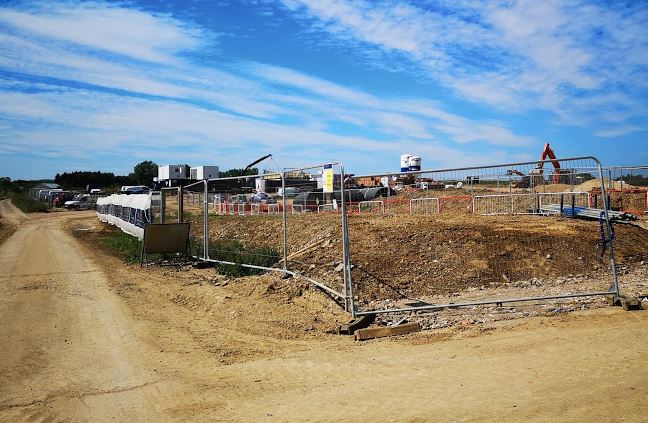 11:30
Text from Ollie (Producer at BBC Three Counties Radio, or 3CR): “We’re doing an outside broadcast from AmpRocks at 3pm today.  Can you be on the show to talk about your walk?”

Richard (excited): “Sure.  Let me come back to you about timings.”

12:30
Walk quicker now, arrive Shillington slightly earlier than scheduled.  Stumble across lovely Lordship Farm Shop & Tea Room.  Ron makes me an egg & bacon butty with a lovely pot of tea (for which he wouldn’t take any money – thanks Ron).  Phill arrives in leathers.  Silvie at a nearby table makes a donation to my walk charities.

Here’s Ron, Silvie and Phill.  Then Ron with Trudi, his wife (taken by Phill – it’s so helpful to have someone else with you to take photos).  Thanks guys. 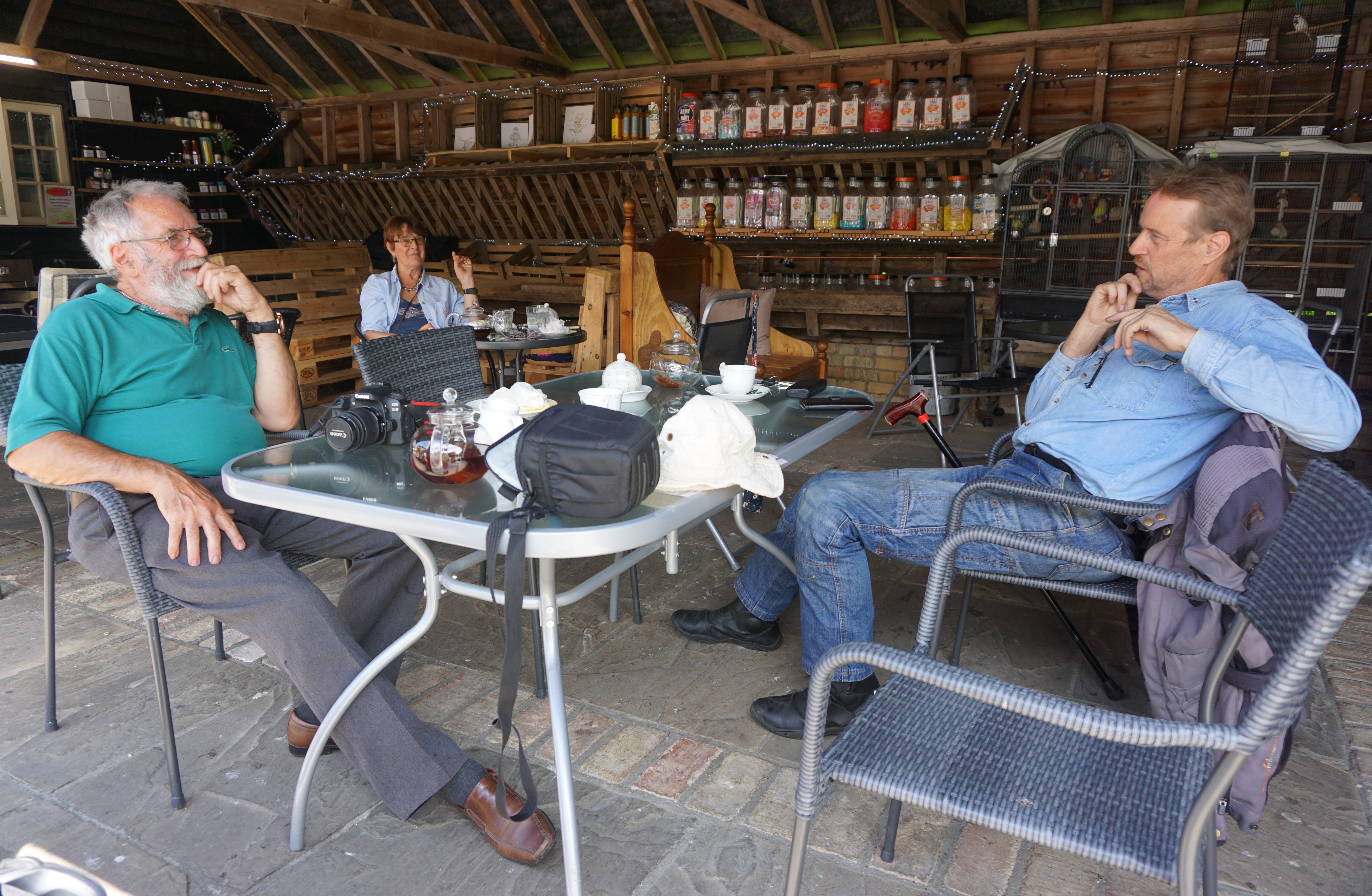 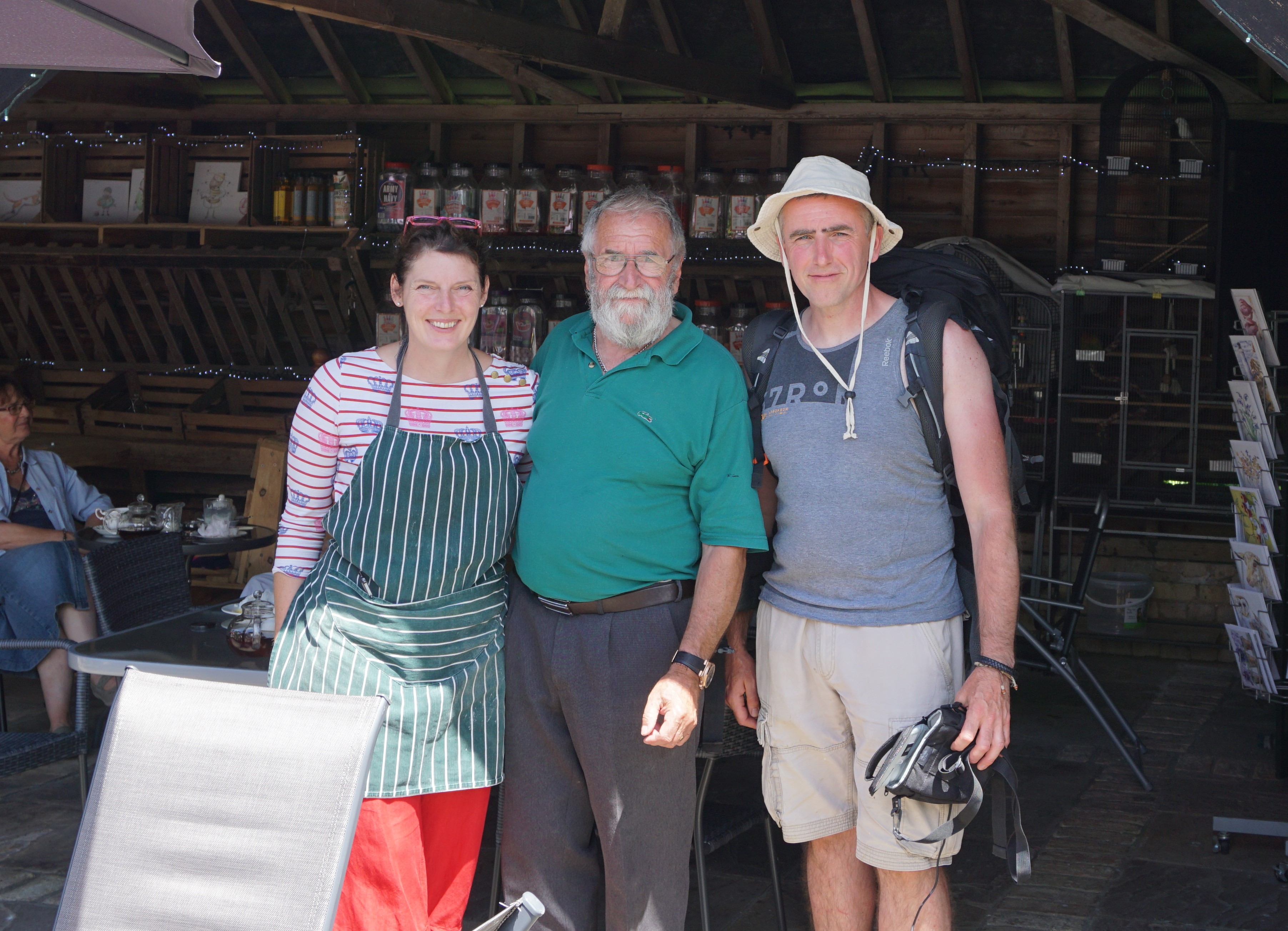 13:00
Make a plan.  I’ll walk on to Wrest Park; Phill will ride.  We’ll have another cup of tea there, then I’ll get a taxi up to Ampthill Park, do the radio interview, taxi back to Wrest Park, then continue the walk.  Sorted.

14:30
Arrive Wrest Park.  Beautiful gardens are open today, but the house is closed for the wedding of Thomas and Valentina. 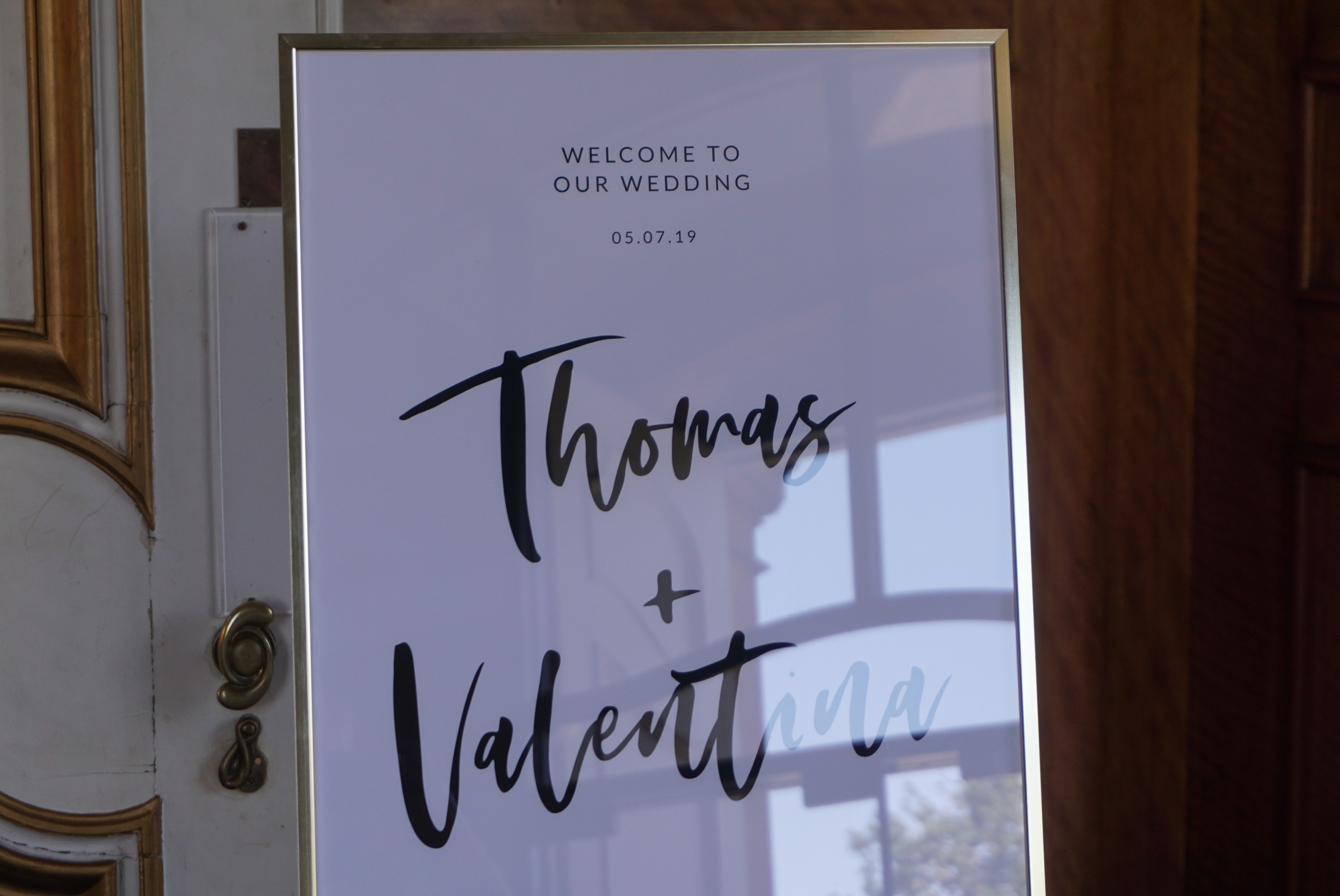 14:40
Russell Shanks (Property Supervisor): “Hello.  I understand you’ve got an hour until your taxi comes.  Let me show you and your brother-in-law around the gardens.” 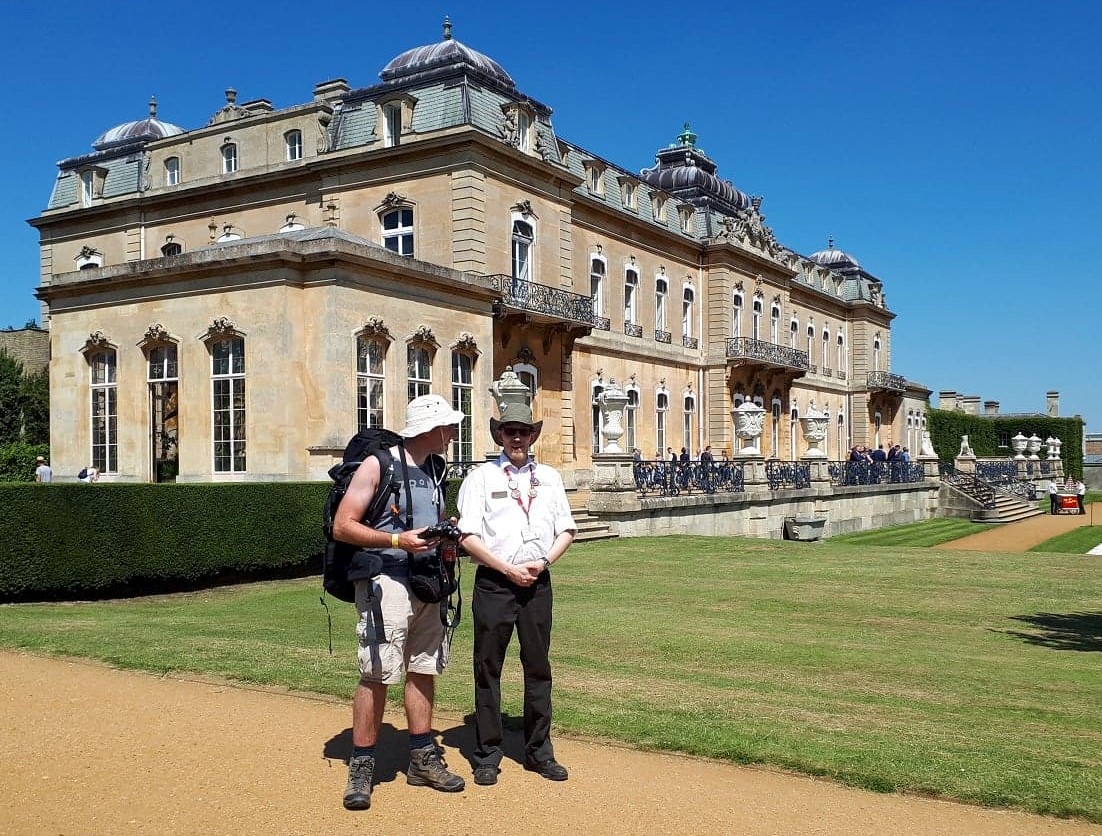 (Phill and I both agreed the next hour was just magical.  And completely unexpected.  The grounds at Wrest are exceptional.  Visit.  And Russell’s palpable enthusiasm for the place was just so exciting to witness.  Thank you Russell.) 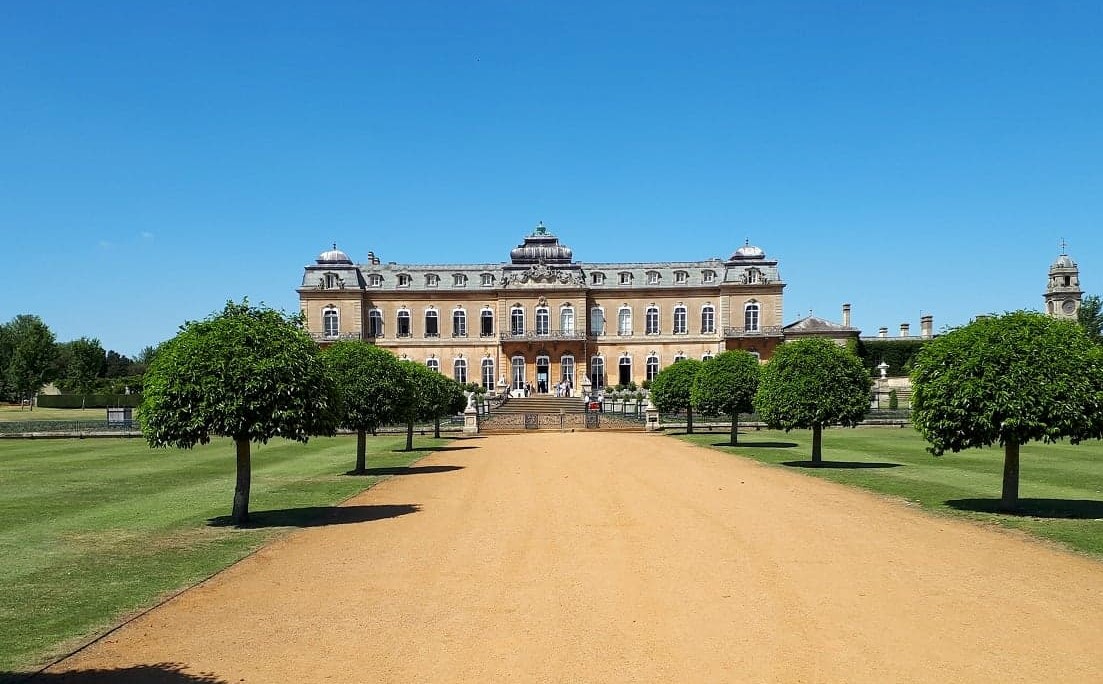 Here’s the golf buggy with the happy couple who’d been having some photos taken at The Pavilion at the end of The Long Water. 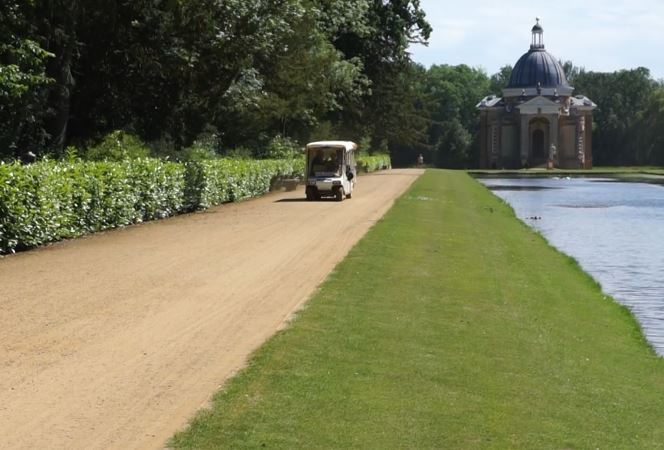 15:45
Quick cuppa with Phill, who’ll then bike back home to Berkshire, then taxi arrives to take me a few miles north to AmpRocks.

Roz Allison (Head of Marketing and Communications for Ampthill Festival): “Ah, you’re the chap walking across Britain.  Let me take you backstage through to the 3CR tent.”

Richard: “Thank you.  Tell me about Ampthill Festival.”

Roz (as we walk through various barriers): “Well it’s an entirely volunteer run three day event.  AmpRocks is the Friday night.  We have The Cuban Brothers, The Vamps, Squeeze and Jo Whiley playing tonight.  Saturday is AmpProms.  And Sunday is the family parade.” 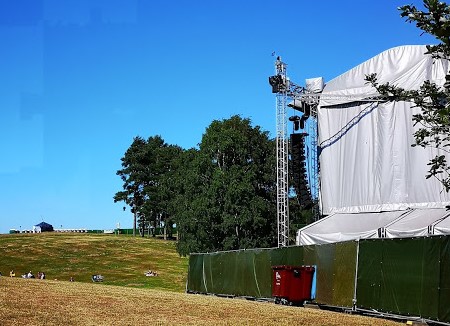 (Roz and the team put in literally hundreds and hundreds of hours organising this fantastic local community event.)

16:30
BBC Producer Hannah introduces me to presenter Roberto Perrone and I do the interview.  You can listen here (interview is 1:33:00 to 1:40:40 – you can hear the sound check in the background).  Roberto was really lovely. 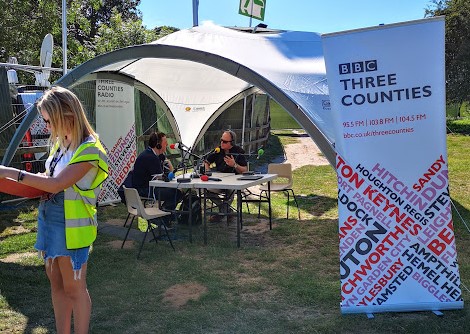 17:00
Taxi back to Wrest Park to finish the day’s walking on to Flitwick.

Taxi driver: “Where are you from?”

17:30
Start walking from Wrest Park in evening sunshine.  Sunglasses on.  Always walking into the sunset.  It’s about an hour and a half to Flitwick.

17:45
Feeling quite weary after an already long day, which wasn’t over yet, I stumble across the Jolly Coopers pub in the village of Wardhedges, and pop in for a shandy.

Alex (customer at the bar): “You look like a man who could do with a drink”.

(Here he is on the right, with Steve, another customer.) 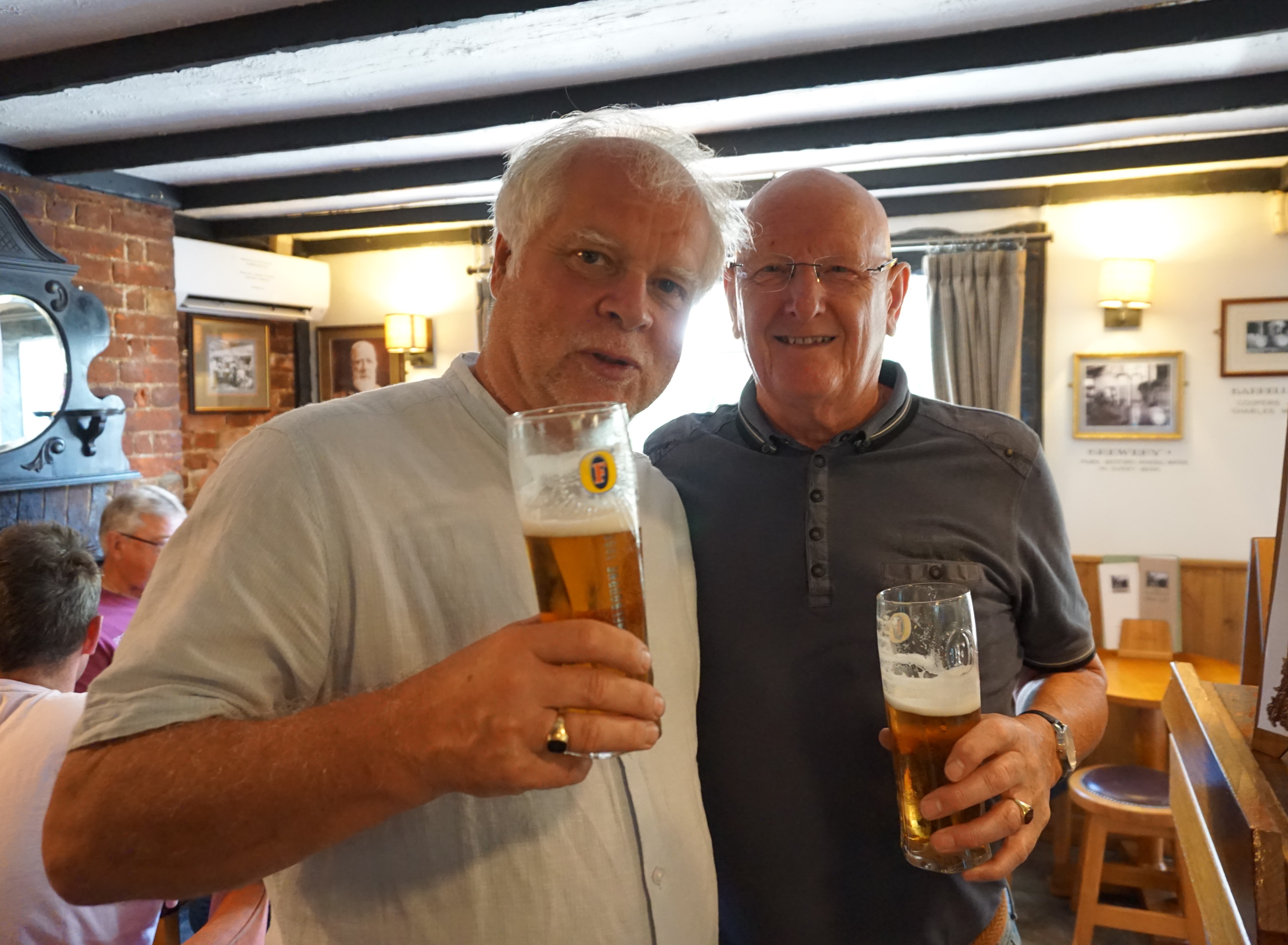 I then chatted with Steve, Alex and Andy the barman about my charity walk across Britain. 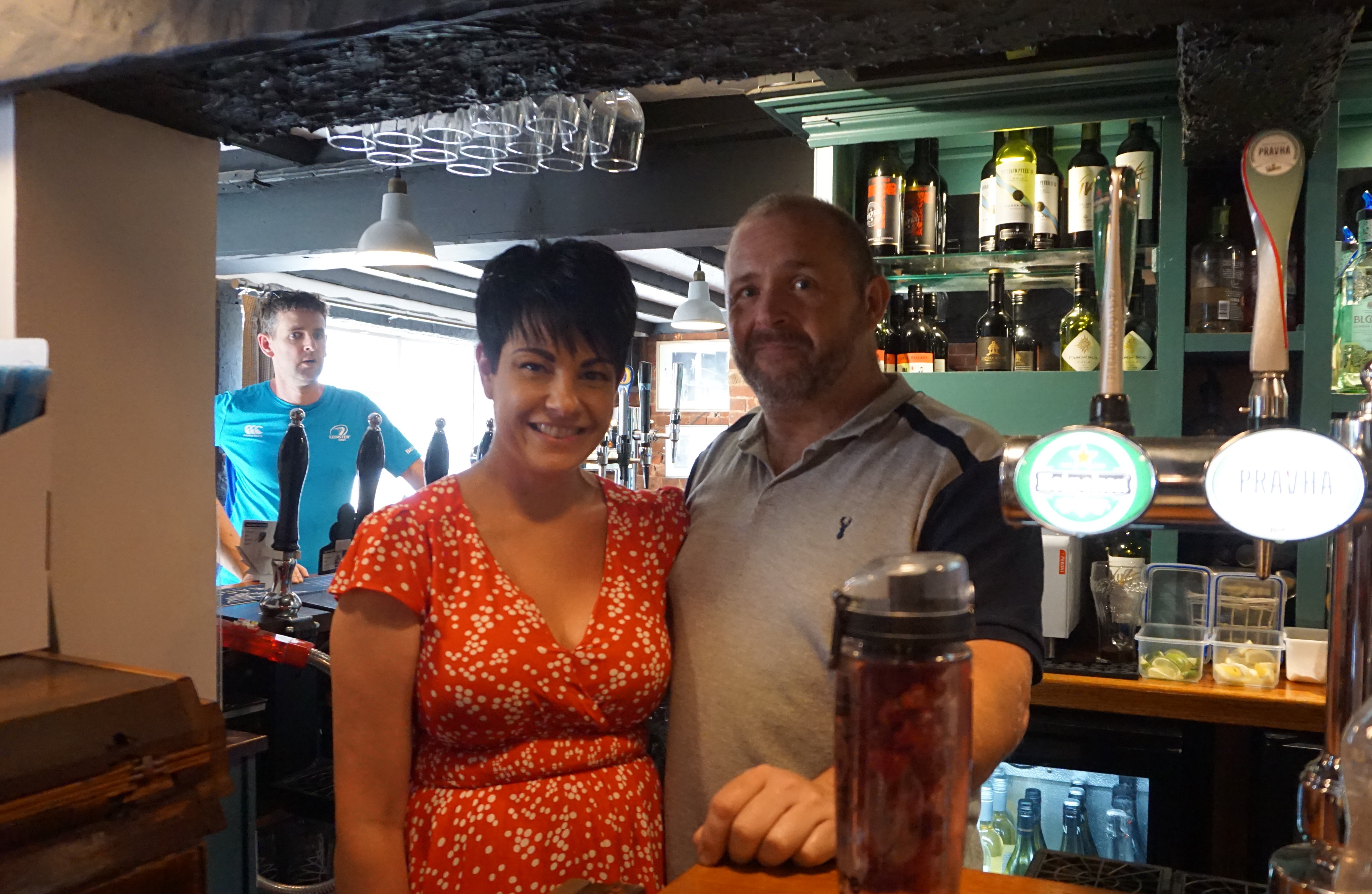 Richard: “Oh my gosh.  I came in here for a pint, but I’m leaving with a whole lot of positivity.”

Alex: “Yes, but you brought that in the door yourself, as well.”

18:15
Call from Katherine (walking back to Southfields station from Wimbledon as I’m walking through a field): “Hi, how are you?”

I try to tell Katherine the story about the Jolly Coopers, but everything and everyone in Bedfordshire has been so unexpectedly lovely, all day, that I blub like a baby.

19:30
Arrive Flitwick Manor, have had to go upmarket again.  Quick shower then taxi back to Ampthill for AmpRocks itself.  Wonderful, wonderful event in the evening sunshine.  Great mix of ages.  Lovely atmosphere.  And some Jollof Rice for me. 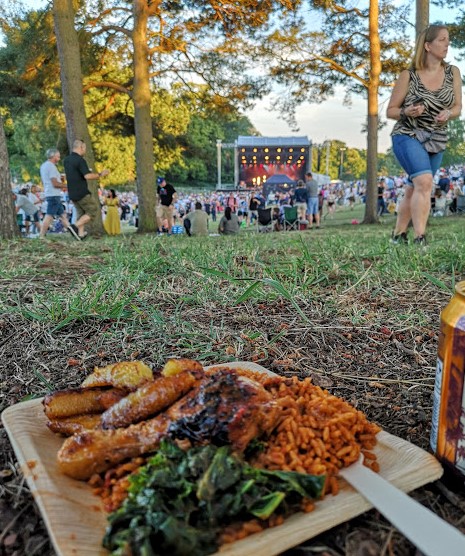 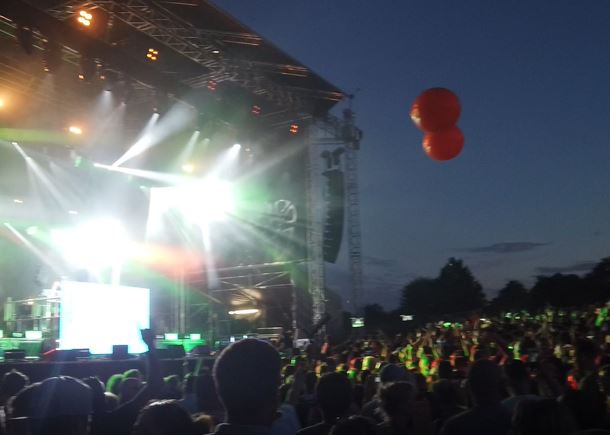 Tomorrow is animals at Woburn Safari Park with my brother (travelling up by sleeper from Devon) and Katherine & Adam who’ll drive from home.  I’ll undoubtedly cry again.

The positivity and hope that I’m finding on 52 is just overwhelming.  Love Bedfordshire.  Love Britain.