Every day on 52 was great, but the three “charity days” just blew me away they were so filled with hope and inspiration.

Remember Friday 28 June when three representatives from The Wilderness Foundation walked with me to Hedingham Castle in Essex?  Kevin’s story of turnaround (have a read if you haven’t already) was just so full of hope, thanks to Wilderness.

Then, a fortnight later on Friday 12 July, it was inspirational to be in a new Woodland Trust wood in Oxfordshire with representatives of the local “friends of the wood” group. It was humbling to feel how trees transcend our short lives, yet to be a part of that living continuity.

And then today: wow!  High up at the wind farms in Brechfa Forest with the Centre for Alternative Technology (CAT) – I just felt as if anything is possible.

But let’s start at the beginning.

Being self-catering meant my niece Hannah and I could leave the flat at The Angel at Llansawel in good time to get on with the day’s walk. 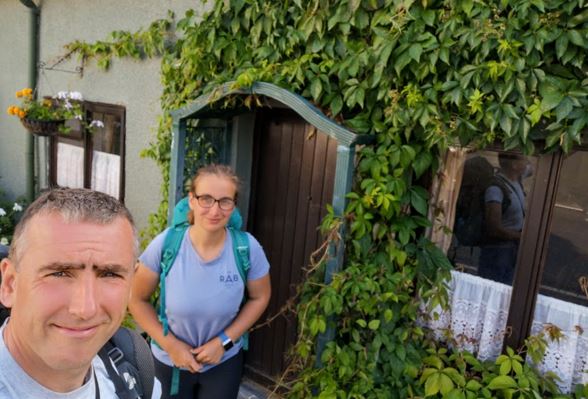 But that advantage was completely lost in the first hour of walking.  You’d think, after five weeks, that I’d’ve learnt that small paths often just aren’t there.  But hope triumphs over experience so we set off over the hill to the Cothi Valley.

Of course, about a kilometre from the river, the path became almost completely impassable often blocked with shoulder high, soaking wet, brambles. 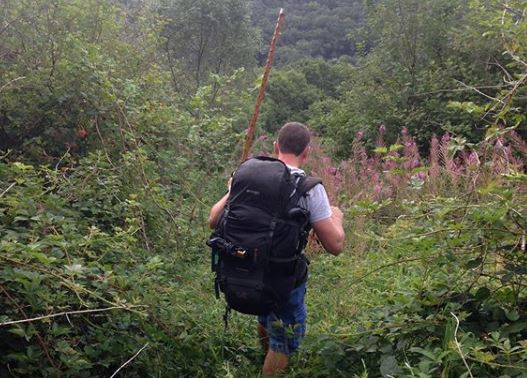 The air was blue with my expletives!  I found these obstacles quite a burden: having to do quite a long walk to get to a meeting appointment and a radio interview later in the day, but without any immediate route forward.

But Hannah’s youthful buoyancy kept my spirits up and we pressed on, hacking through the brambles.  I was very grateful for my dad’s stick (pictured above) which I’d brought with me for the first time on this last week of the walk.

The task for the day was to traverse the huge Brecha Forest (the green swathe on the map below) and get to the meeting point on the western edge of the forest by 16:00. 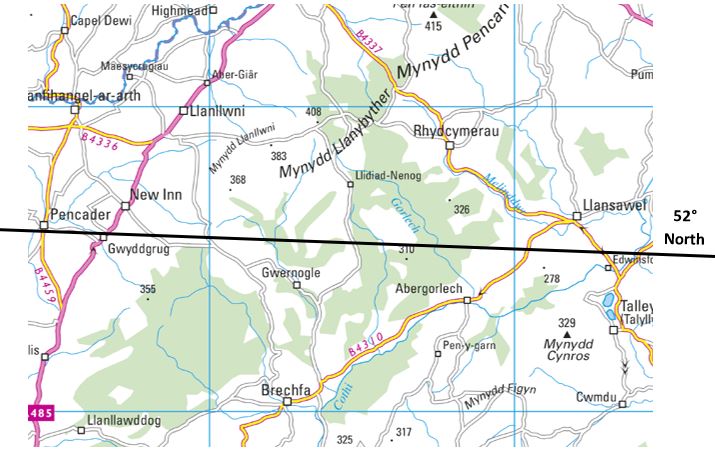 After the path debacle, however, we needed to press on to Abergorlech and then make quick time so we walked down the (quiet) B road to the village of Brechfa itself.

The approach to Abergorlech was fabulous, along the beautiful Cothi valley.  I wanted to dawdle and wondered why I’d put us under pressure to get to the meeting later.  That’s life, I guess. 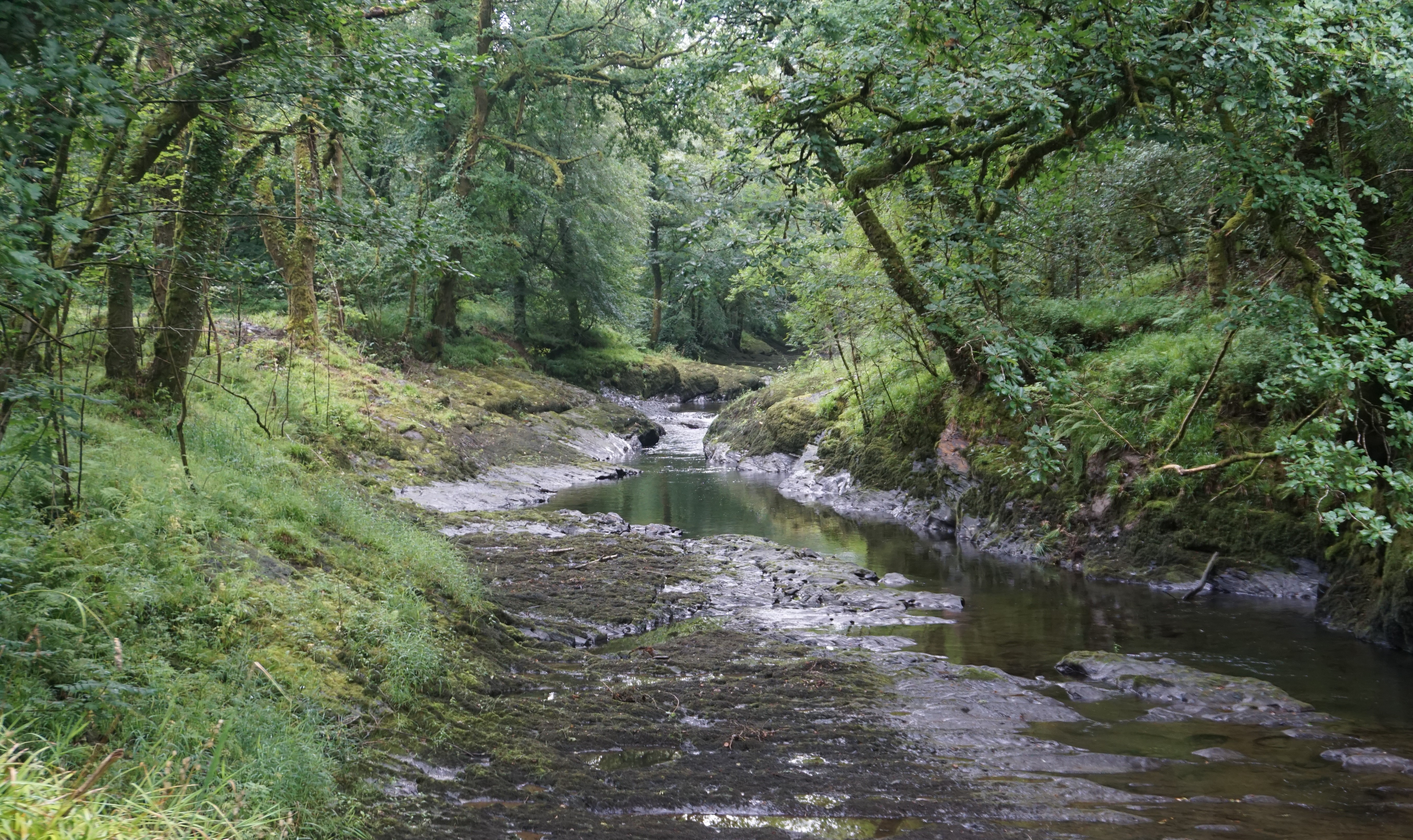 Google didn’t say there was a shop or open pub in Brechfa, so Hannah had made us some cheese sandwiches at the self-catering flat (I know!).  However, one of those wonderful 52 moments happened when we arrived in the village and discovered the Brechfa Community Shop.

Run by volunteers, this was one of several community shops I’d passed on 52 (including at Castle Hedingham in Essex and Bromsberrow in Herefordshire).  What wonderful examples of communities coming together, offering their time and energy for free, to provide essential local services to local people.

Refuelled, Hannah and I headed north west, entering the forest, up over the hill towards Pencader. 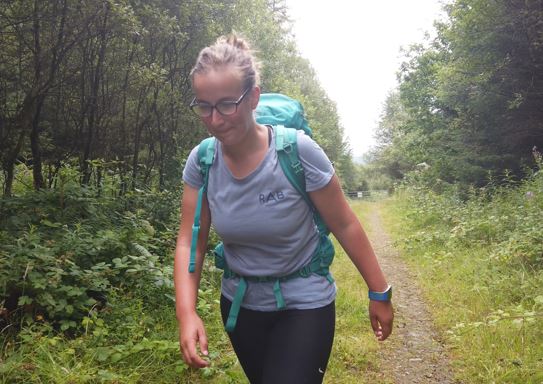 It was steep.  There wasn’t a lot of conversation.  Trees were mainly coniferous (not great), but some mixed / deciduous (better).

Then, emerging in clearings like gentle giants, in the improving weather, we started to see the turbines. 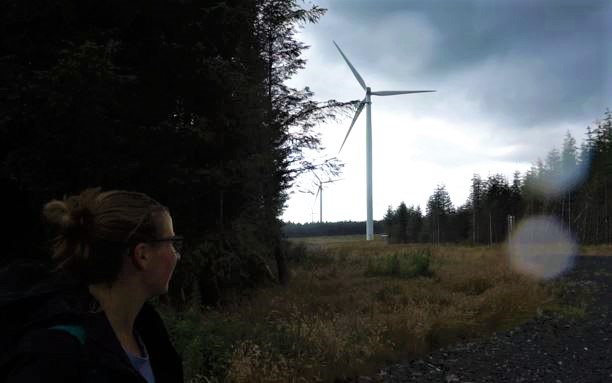 These were majestic machines.  Neither of us had ever been so close to so many wind turbines – it was awe-inspiring.

This was the first of two separate wind farms up on the hill.  This was the newer, larger, one: innogy’s 28 turbine Brecha Forest West Wind Farm which opened a year ago.

It’s so new, in fact, that it isn’t yet on Ordnance Survey maps or Google satellite images.  So it wasn’t originally part of my 52 planning.

However, in the first week of the walk back in June  my Essex charity, The Wilderness Foundation, had been the Charity Partner at the annual BusinessGreen Leaders Awards event.  I hadn’t heard of these awards before, so I looked up last year’s winners, and lo and behold, the 2018 Renewable Energy Project of the Year Award was won by Brechfa Forest West Wind Farm.

So I found out about a new wind farm on 52 in Wales because of my charity on 52 back in Essex.  I love things that link up like that.

Having discovered the new farm, I’d arranged to meet innogy’s Bethan Edwards who led the development of the farm, together with her public relations colleague Ffion Davies. 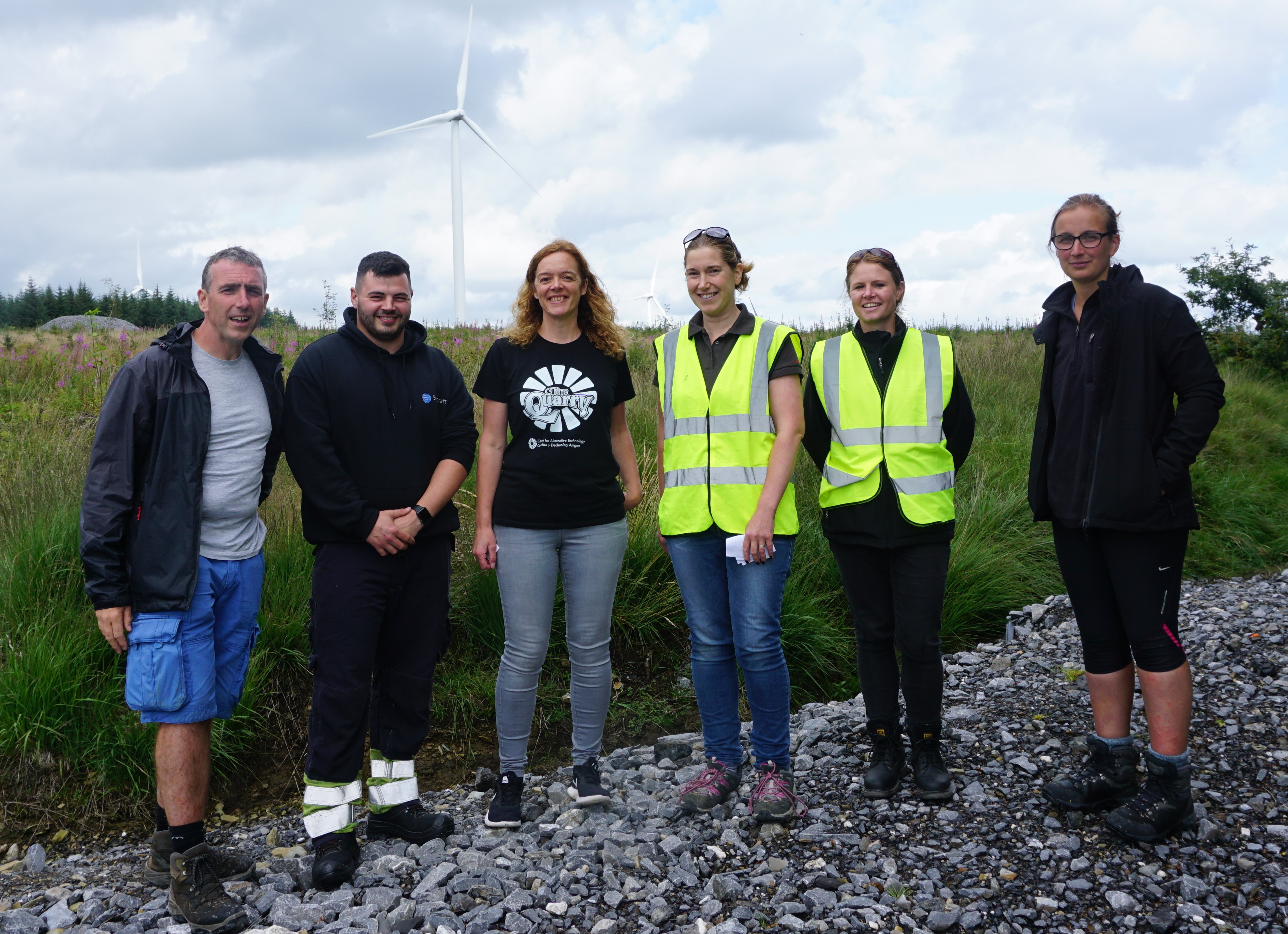 Bethan and Ffion are with Hannah on the right.  Also pictured are two other very important people.

Next to me is Rhodri Jones, one of the Statkraft technicians who operate the other wind farm on the hill: the 10 turbine Alltwalis Wind Farm which opened a decade ago.

And in the middle is Eileen Kinsman, Head of Development at my third charity, the Centre for Alternative Technology (CAT), who’d travelled 40 miles south from CAT’s base in Machynlleth to meet with us.

Up on the windy, and slightly wet, hillside, this was the most inspiring group of people!

We learnt how Rhodri spends a lot of his time up high, inside the turbines, monitoring the hubs.  The new innogy turbines are even higher than the original Statkraft ones: because longer blades (and thus higher turbines) generate more electricity.  And Bethan told us that the latest turbines now being installed are even higher still. 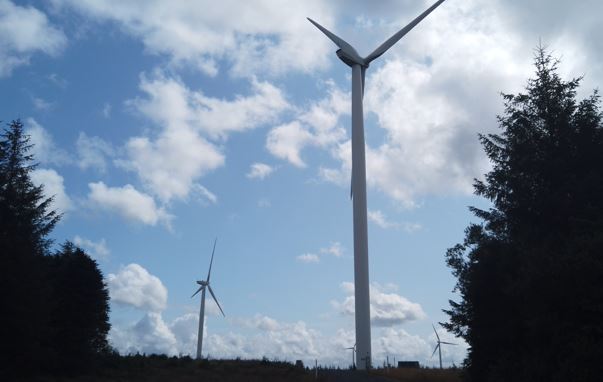 There’s footage of these majestic turbines in the Week 6 Highlights Video: I’m not sure if their scale really comes over, but take it from me, it was wonderful to walk amongst them.

Loads of thoughts came out of our group chat about renewable energy up on the hill.  Here’s a flavour of just three points that I took away to think about (go with me – it’s exciting!):

1. Wind farms fit their local environments & communities: I’d heard that there can sometimes be local objections to wind farms, both physically and financially.  However, Bethan explained how the innogy turbines have been “keyholed” into the woodland.  Hannah and I both felt they were incredibly unobtrusive, despite their height.  Plus, Ffion described the Brechfa Forest West community investment fund which will invest over £11m in the local community over the next 25 years, really embedding the benefits of the farm in the neighbouring areas.  And no greenhouse gas emissions.  What’s not to like?

2. Wind farms provide high quality local employment: Rhodri does specialist technical work operating the Statkraft wind farm, but he’s a local boy, born and bred in Llansawel where Hannah and I had walked from this morning.  This is how things should be: you shouldn’t have to move or commute into urban areas to find high quality employment.

3. Wind is a key part of CAT’s Zero Carbon Britain hub: Most excitingly, though, was Eileen’s update from CAT.  They have observed a tipping point with huge interest in their zero carbon research coming over the last nine months or so.  CAT has been inundated with requests for advice from local authorities, businesses and policymakers looking to make their own local zero carbon action plans.  Because of this they have just secured the go-ahead to launch a zero carbon “hub” to spread their knowledge and expertise across the UK and even globally. 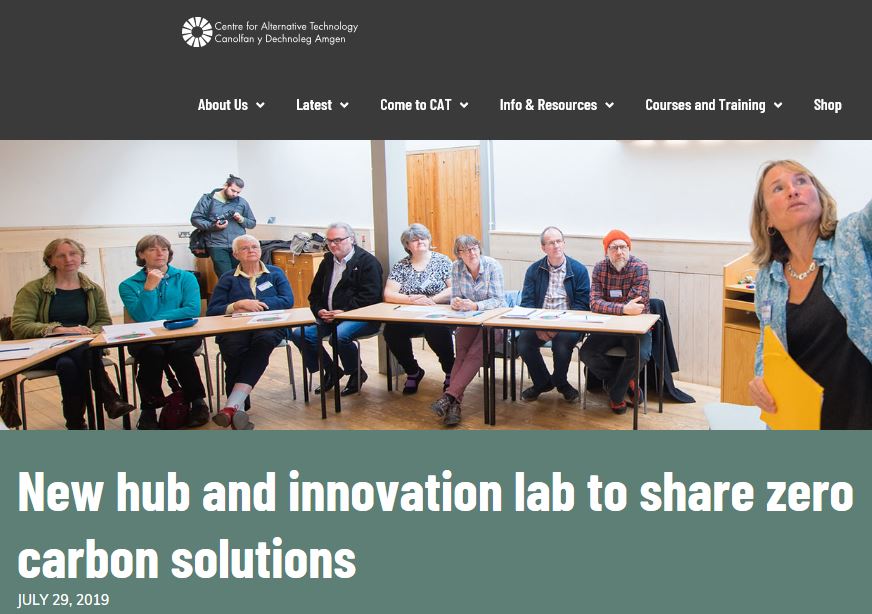 This is such an important and exciting development that I’ve covered it in both the Week 5 and Week 6 Highlights Videos.  Have a look, and if you’ve not yet made a donation CAT, please do if you can.  As one kind donator commented on the JustGiving page: “Keep going, my grandchildren’s future may depend on you”.

Final spooky coincidence before we all went our different ways: whilst staying at innogy, Bethan is starting a part-time Masters course at CAT this September.

Once again Hannah & I were relatively quiet as we came down off the hill on the specially constructed wind farm access road into the village of Pencader. 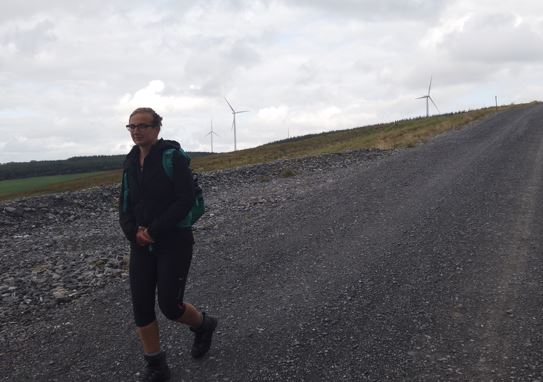 We weren’t out of breath this time, though.  We were just speechless following our inspiring meeting on the hill.  I was left feeling, if only people like Bethan, Eileen, Ffion & Rhodri were running the world, everything would be OK.

In Pencader, we arrived at Jayne’s and Ian’s amazing School House B&B (more on that tomorrow) just in time for my drive time interview with Oliver Hides on BBC Radio Wales (you can listen here, the interview is at the end of the show starting at 1:25:00).

Oliver told me on air about the famous Branney’s fish & chip café in Pencader, so Hannah & I popped along the road for a final evening meal together at the end of this wonderfully inspiring day. 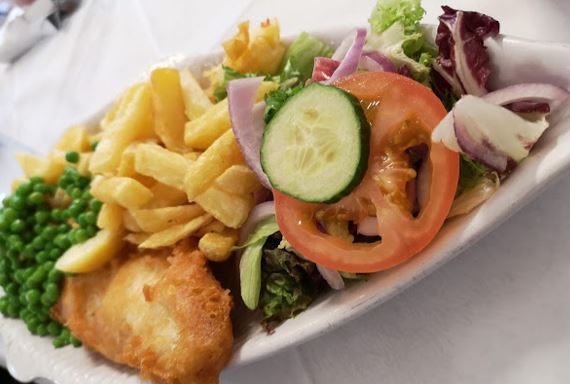 Today was exactly what 52 was meant to be all about.  I have been so lucky to be able to do this walk, meeting so many incredibly inspirational people, and finding (despite life’s challenges) so much hope and positivity for the future.