So many folk have (quite understandably) asked: “Richard, why are you walking on 52°N?”

There are several answers to that question.  The idea was to walk through a random cross section of Britain to see what I would find.  A straight line seemed a good solution, but which straight line?

Pretty much the longest horizontal line in Britain is Suffolk to Pembrokeshire so that seemed a good starting point, but why specifically 52°N?

Well, if you’ve been reading these updates for a while, you may recall that:

1. Parents: My mum came from Essex and my dad’s parents came from Gloucestershire and South Wales, which are all on 52°N.

2. Friends: My good friend from school, Roger, married in Pembrokeshire and he and Moira have been farming together just south of Fishguard for 25 years (where we have subsequently enjoyed lots of holidays over the years as their children and ours have grown up).  Fishguard lies exactly on 52°N.

3. Holidays: We’ve (completely coincidentally) had other important family holidays on 52°N at Snowshill near Broadway (final holiday before children) and at Glasbury near Hay-on-Wye (final holiday with Heather).

The whole timing of the walk was therefore scheduled for Summer 2019 and built around today, my 52nd birthday: 8 August 2019.

And it was a super special day today for lots of different reasons.

The walk would take me up over the sacred northernmost summit of the Preseli Hills: Mynydd Carningli (Mountain of Angels), with spectacular views out to sea.  And coming down to Dinas Cross, we had a special birthday tea fixed for the afternoon. 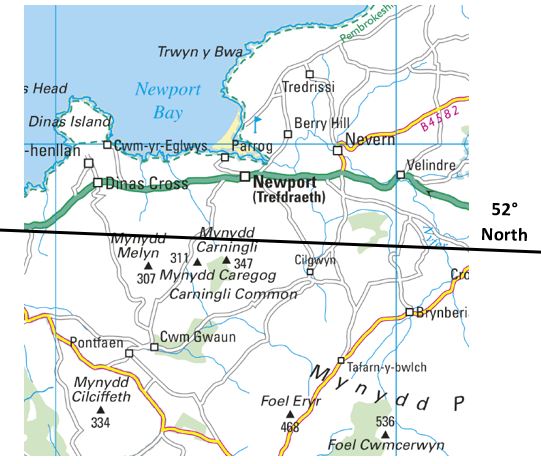 Companions: So many friends and family members have been kind enough to walk with me on 52, but today was easily the biggest group.  Go with me on who’s who:

Roger and I met 41 years ago next month when we both started at Forest School in Winnersh near Wokingham in September 1978.

Roger married Moira whose family farm is at Letterston just south of Fishguard.  They’ve got two children: Ffion (whose boyfriend is Tom) and Dafydd (whose girlfriend is Cerys).  These are the Ridgways.

Moira’s sister is Bethan who married Steve (another Englishman like Roger) and they live just a little further south of Letterston in Wolfscastle.  They also have two children: Elen and Gwenna.  These are the Maycocks.

Today, I was joined by Ffion, Tom, Cerys, Steve, Elen & Gwenna.  Oh, and Cadi, the Maycocks’ dog.  What a wonderful, youthful and optimistic group to walk with on my birthday!  Well, apart from Steve that is 🙂 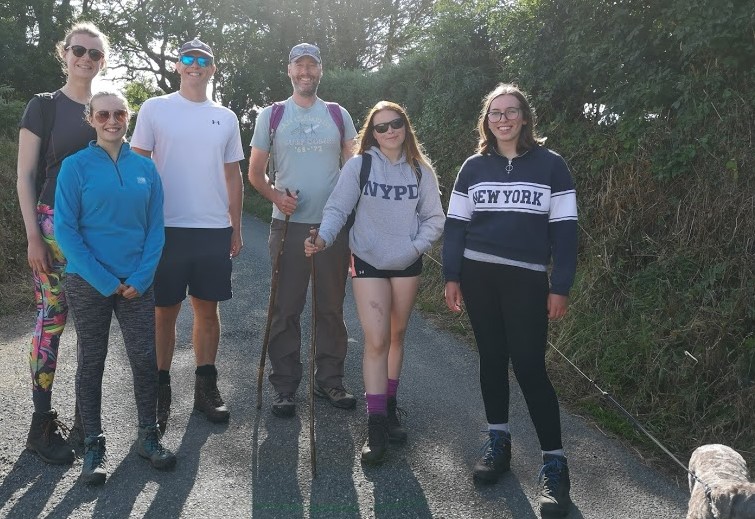 Before climbing Mynydd Carningli, though, we had a meeting scheduled with a very interesting man called Brian John. 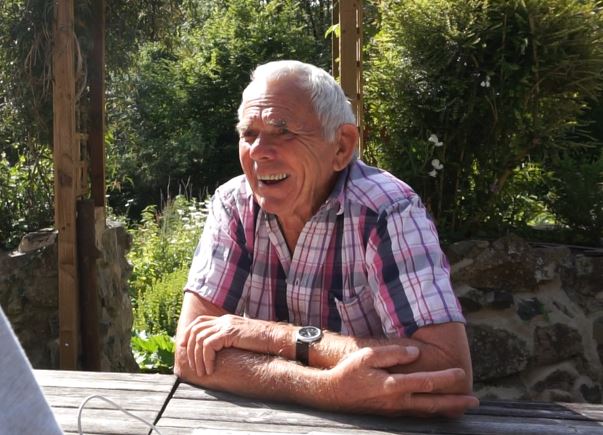 Brian has done many things (see his website), but I particularly wanted to meet him because he’s written a series of novels all set around Angel Mountain.

He made us all a cup of tea in his garden (he and his wife Inger live just under the mountain) and I had a lovely chat with him for half an hour. 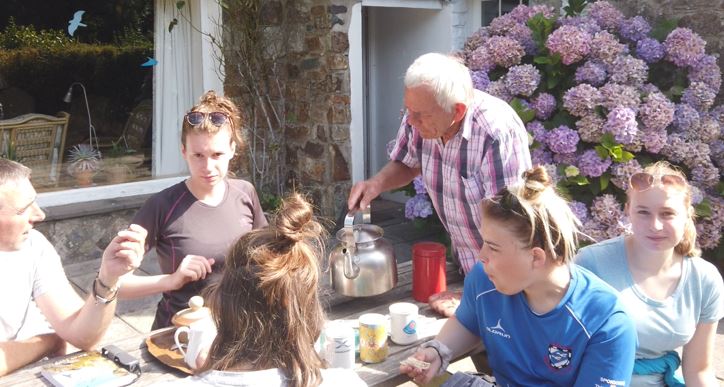 Angel Mountain is a sacred place, very special to Brian’s fictional heroine Martha Morgan.  She strongly connects with the place in many different ways.

We got talking about the Welsh concept of “hiraeth”.  It’s not really completely translatable, but it’s a sort of longing for a particular place, or maybe a time, or a person, maybe “home” or an ancestral “homeland”, which may not exist any longer.  It’s also associated with the bittersweet memory of missing something or someone, while being grateful for its / their existence.

You know, of course, where my own bittersweet memory lies.  Everything was good.  Having walked for 30 days, I was about to ascend the Mountain of Angels, on my birthday, with a group of lovely young people with their lives ahead of them.  But gosh, I still miss her.

I guess you could boil down this whole walk to me trying to reconcile two words: Heather’s gone.  Or, more accurately, Heather’s dead.  30 days on, I think I’m maybe moving away in my head from “reconcile” and moving more towards “accept”.  Heather: “Couldn’t you have done that a lot quicker and more easily at home?  And without boring all the folk reading this?” 🙂

I could’ve talked to Brian for ages, but Carningli beckoned. 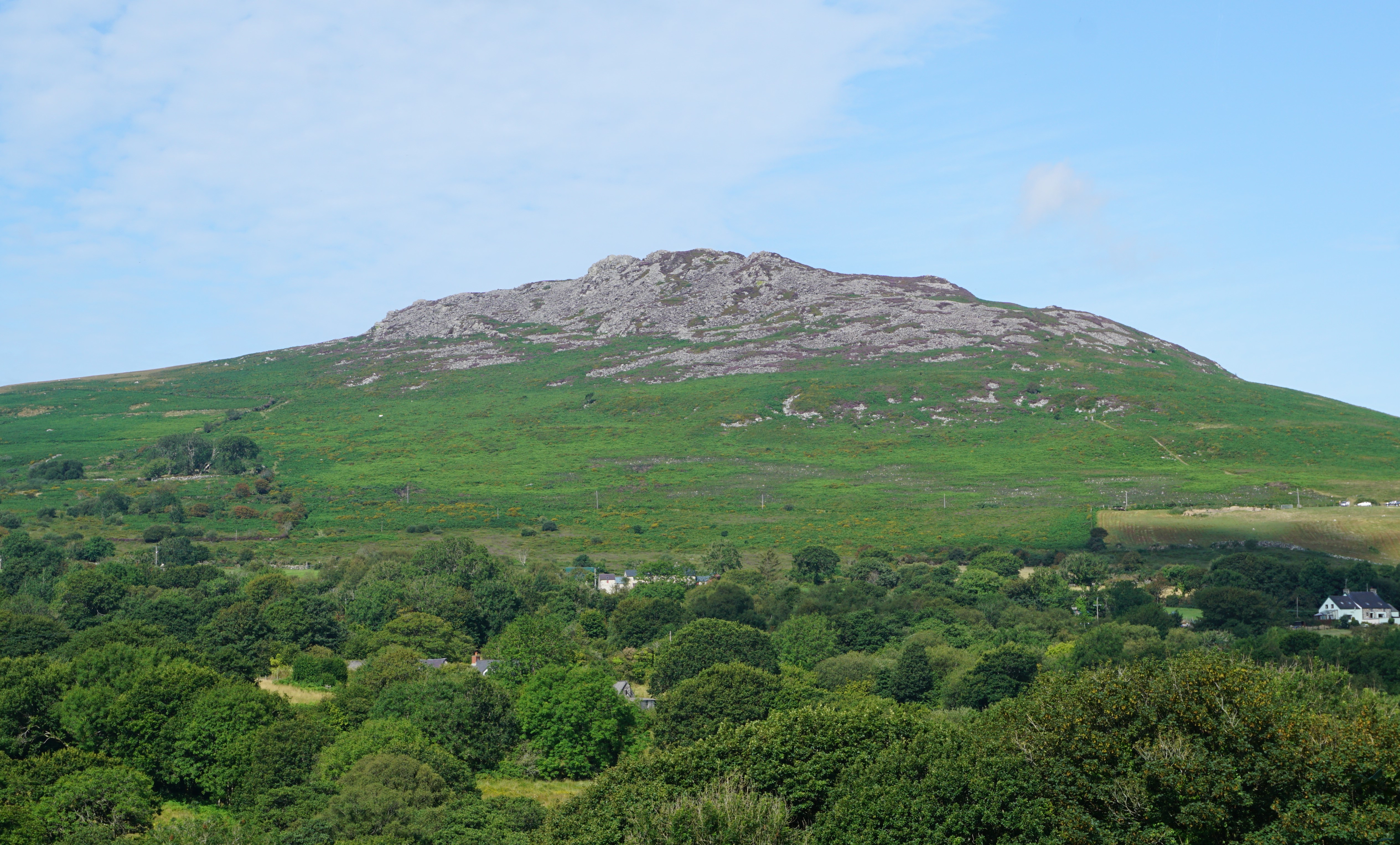 It was a tricky climb up over the rocks at the top, but, as anticipated, the views were spectacular.

Do you believe loved ones who have died watch over us?  I’m not sure.  But I’m thinking there’s a good chance they might have been watching today. 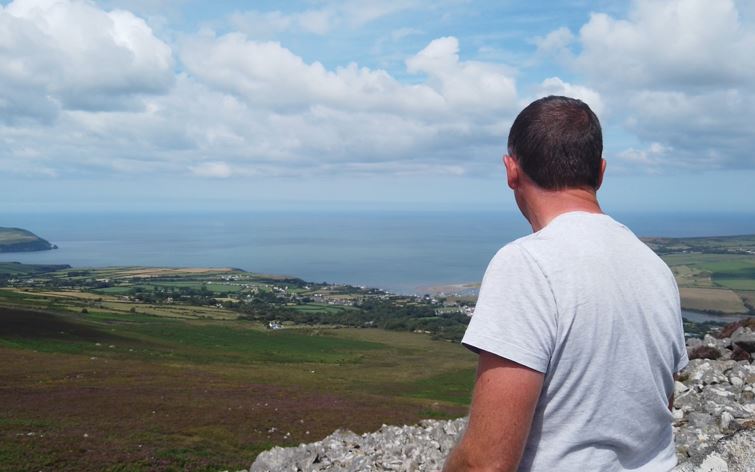 No time to get maudlin (as Heather would say): we needed to get down the mountain for our tea appointment.

Of course we were late.  The path disappeared.  When will I learn?!

But we eventually made it to the lovely Bara Brith Coffee Shop which is in a converted chapel in Dinas.  Roger, Moira and Bethan joined us, and, to my great surprise, so did my friends Helen and Laura from Wokingham.  We had a lovely tea and the assembled company sang Happy Birthday to me (in Welsh, of course). 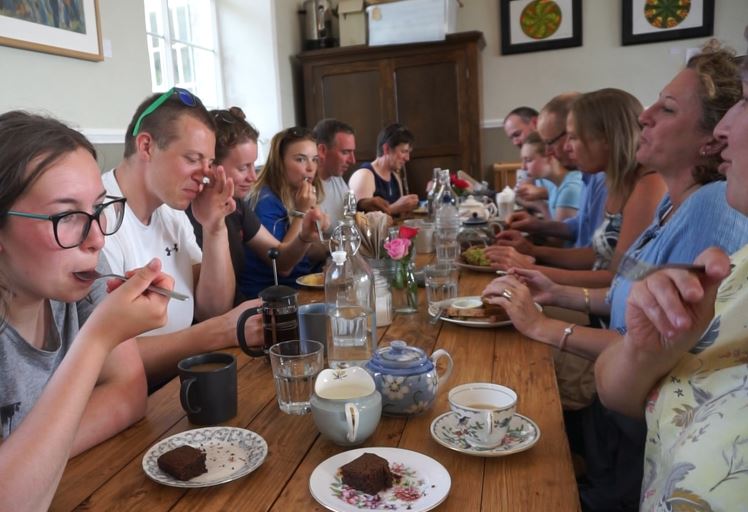 Then Moira gave me a framed print of a poem she had written all about 52.  I know!  How lovely, and how creative, are my Welsh friends?! 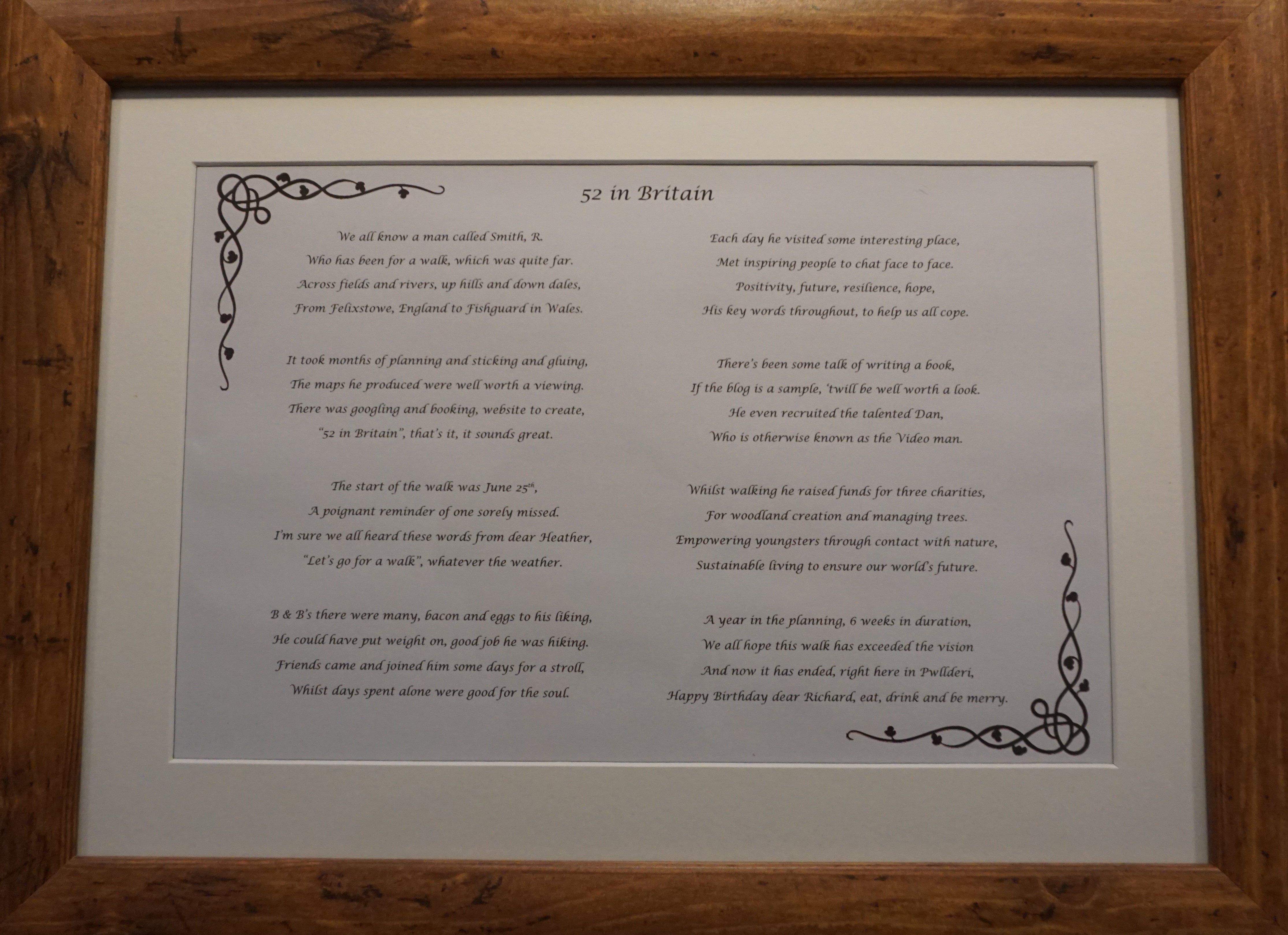 My final overnight B&B was Y Garth in Dinas.  Helen & Laura were staying just over the road which was great as we had a chance to catch up on everything, including, of course, Luke’s funeral.  Are lost loved ones with us?  In our hearts and in our heads, yes definitely.