Great to be up high today on the Black Mountains coming into Wales. 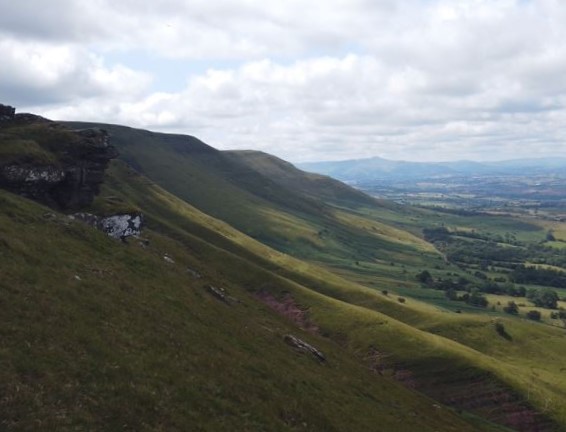 Whilst my eyes were looking forward into Cymru, though, my mind was thinking back to ancient, early Middle Age, and recent history (400 million, 1,250 & 6 years ago respectively).

About 400 million years ago

Why were the views today so spectacular?  (If you’ve watched the end of the Week 4 Highlights Video you’ll know what I mean.)  Well, I’ve been promising (or is that threatening?) a geology lesson for weeks now, and I don’t think it can be avoided any longer.

Why?  Well on 52, I’m not just travelling across the country, I’m also travelling back through time.

The different rocks under my feet were formed as different sedimentary layers at various different times in ancient history.

However, through the movement of the earth’s crust, over millions of years, and other huge geological forces, these layers have been tipped up on their side.

This is a bit like the pile of outstanding paperwork in your kitchen (we’ve all got one) being gently knocked over.  The edges of some really old paperwork (at the bottom of the pile) become exposed, deep under more recent papers which have subsequently been piled on top.

A geological map of the UK makes this easier to understand.  Here’s a very simplified one from the excellent Make-a-map facility from the British Geological Survey (BGS): 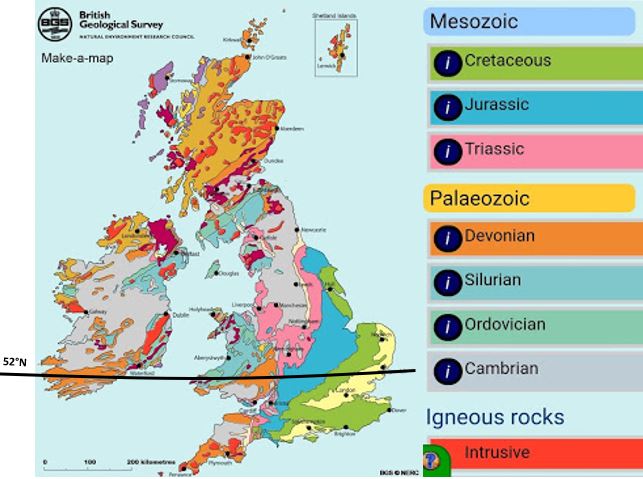 Looking at the line of 52°N that I’ve drawn on the map, just focus on the orange, blue and green coloured areas.

Orange: This represents the old red sandstone rock (of the Black Mountains) laid down during the “Devonian” period, between about 360 million and 420 million years ago.

Blue: This represents the golden limestone (of the Cotswolds) laid down during the “Jurassic” period, between about 150 million and 200 million years ago.

Green: This represents the white chalk (of the Chilterns) laid down during the “Cretaceous” period, between about 65 million and 100 million years ago.

Starting 52 in Suffolk and Essex and moving west, I’m actually travelling backwards in time along a huge geological timeline, stretching back into history around 500 million years.

I’m continually crossing over from the edge of one rock type to another, hence the repeated sequence of hills and views.

I’ve only been walking for four weeks, but in that time I’ve travelled back about 400 million years up to the Welsh border.  This all slightly messes with my head.

Today was the day to be thinking about geology because I was joined again by Sean (remember him from the day we saw the oldest clock in Buckinghamshire?) and his wife Pam.  Sean is an incredibly knowledgeable geologist – here he is explaining how different speeds of water formed the angled layers of rock you can see.

Pam & Sean had messaged me the night before asking if they could decide at the last minute to join me today.  Of course I’d said yes.

For a short while we walked north (i.e. away from the 52nd parallel), towards Hay Bluff trig point, along Offa’s Dyke Path: 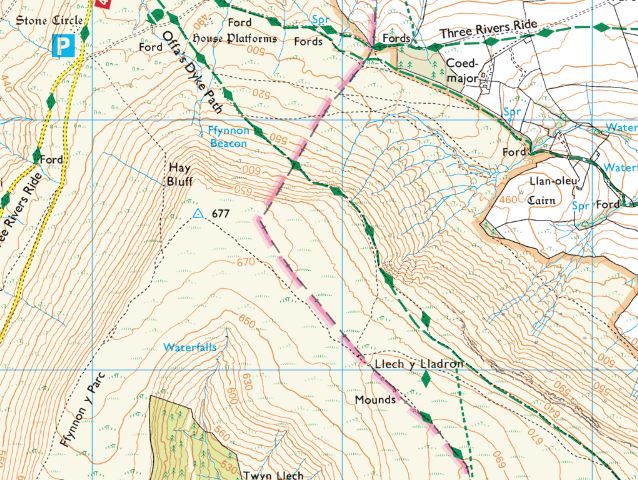 Offa’s Dyke Path is a National Trail (or long distance footpath) which runs north-south more or less along the England / Wales border for 177 miles from Chepstow to Prestatyn. 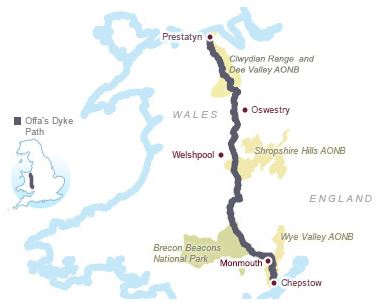 But who was Offa?  And what is his dyke?

Offa was King of the Mercians, a tribe of central English warriors, from 747 to 796 AD.  There was great unrest between the English and the Welsh in the border region, and Offa quelled this by ordering the building of one of the most remarkable structures in Britain. 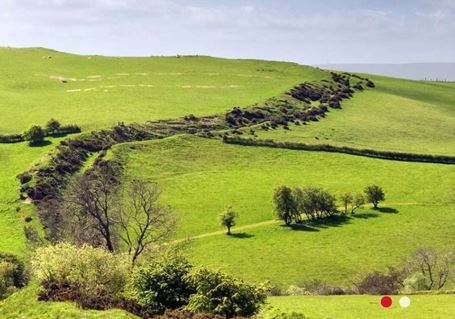 Offa decided to construct of a great earth-wall and ditch, or dyke, running from ‘sea to sea’.  As you can see in the picture above, it consists of an earth bank (standing up to a height of 3.5 metres) behind a deep ditch (with a width of up to 18 metres).  The work to build this over dozens of miles was a mammoth undertaking requiring thousands of men.

The dyke doesn’t quite stretch all the way from the Bristol Channel to north Wales: Offa died in a battle against the Welsh in 796, and it’s believed he was trying to establish a final link in the dyke to the Irish Sea in the north.

We were only on Offa’s Dyke Path for a very short while, but it certainly got me thinking about life in the early Middle Ages.

Today, though, perhaps more pressing on my mind than huge spans of time, was the memory of a very special Smith family holiday in 2013. 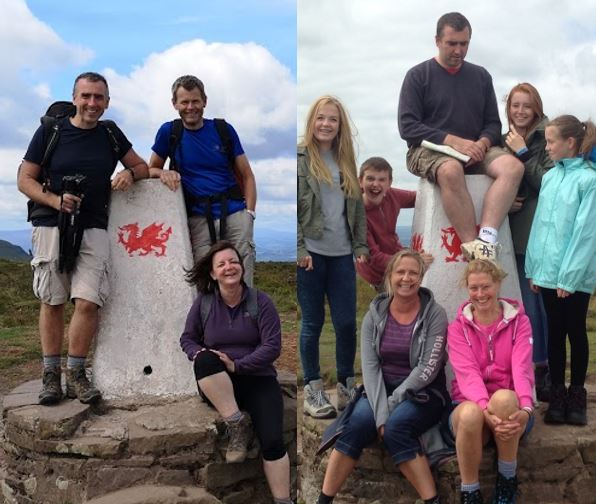 On the left are Pam, Sean & myself at the Hay Bluff trig point today.  On the right, it’s August 2013 at the same place, and we’re on holiday with our friend Helen and her daughters Eve & Fay.  (As ever, daughter Felicity seems to have done a disappearing act!)

On the map of today’s walk below, you can see Hay Bluff (bit of a deviation from 52, I know) as well as Glasbury which is where we stayed in 2013. 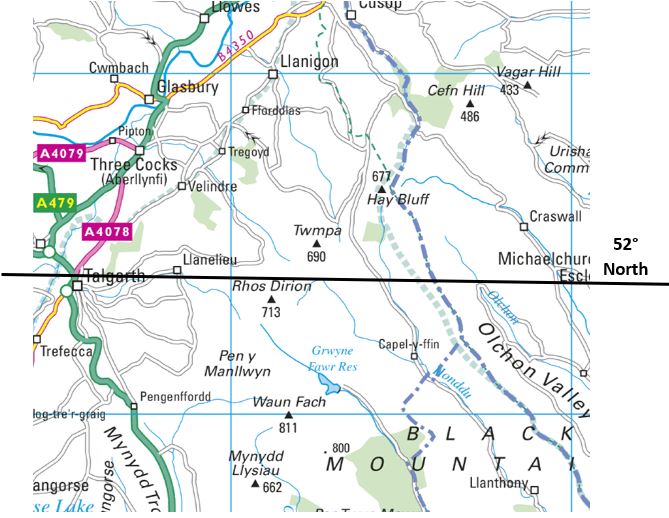 As Shakespeare has Macbeth say: “Life’s but a walking shadow, a poor player that struts and frets his hour upon the stage, and then is heard no more.”

Life is fleeting, and maybe, in the grand scheme of things, we can all afford not to fret quite so much during our brief time on earth.

Now properly in Wales, we walked down off the Black Mountains into the gorgeous town of Talgarth, where we enjoyed some wonderful tea and cake at The Baker’s Table café at Talgarth Mill.

There’ll be more opportunities to look back and look forward tomorrow, when I’ll be walking with my sister Eleanor.  Can’t wait!