Waking up in Herefordshire was a joy.  A perfect, perfect Sunday.

Eat your hearts out Herts, Beds, Bucks & Oxon.  You were pretty, but Herefordshire’s gone straight in at number one in my book.  Just gorgeous.

It started with breakfast.  Turns out Much Marcle’s Parkside B&B is run by Stephen Bull, a Michelin starred chef who also won Pub of the Year.  Stephen’s hospitality was impeccable.  And he made a kind donation to my charities! 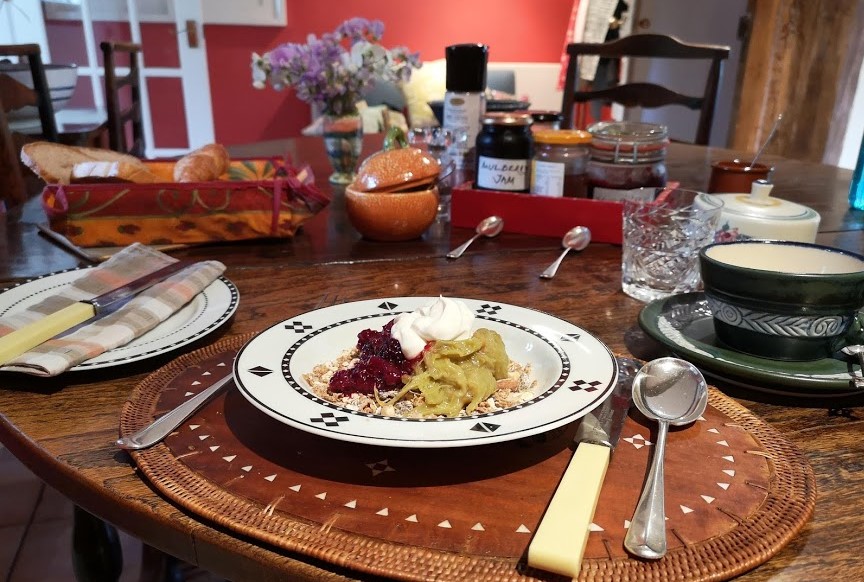 Walking out from Stephen’s, before 09:00, on a crisp morning, heading for Marcle Ridge was truly special.  The morning is the best time.  Why do we only learn this as we age?

Then my sister messaged asking if we’d seen Moon Landing Live on Channel 4 the previous evening, celebrating 50 years since the first moon landing.  I thought the original music was haunting.  In fact, as you’re reading this, why not go to the composer David Schweitzer’s website (click here), scroll down and listen to it.  All the tracks are great, but my favourites are The World is Watching, Touchdown and Finale.  Turn it up.

I’m not going to the moon, only walking across Britain, but the hope and positivity I heard in this music seemed spot on to me this Sunday morning.

From Marcle Ridge, there’s a great view back east to the Malverns (Sean), and looking forwards west there was view after view of beautiful rolling countryside. 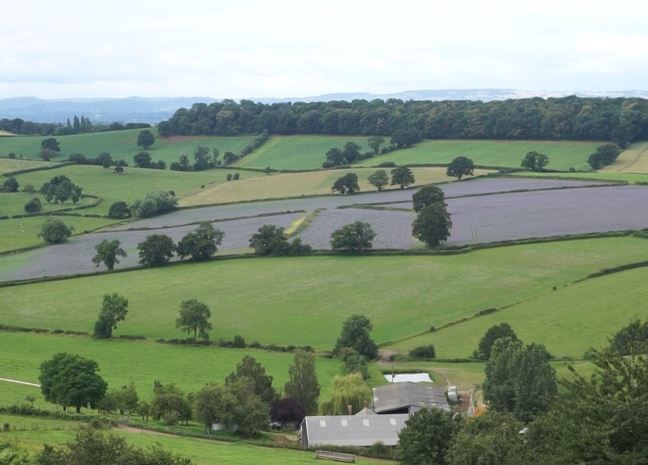 I passed the tiny village, where Dick Whittington was born, called Sollers Hope, meaning “hope gifted”.  Exactly what I’m trying to do on this walk really. 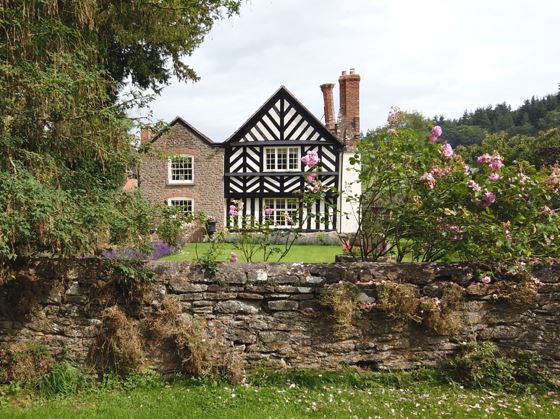 As usual, I was on a timer – this walk isn’t ever relaxed!  Out of the blue yesterday, the father of our good friend Pam (that’s Sean’s wife) had phoned as I was walking through a field with Darren and Steve.

“Richard.  It’s Des Latimer.  We’re staying with friends in Abergavenny.  Can we come and meet you tomorrow?”

Of course, I was delighted.  We’d arranged to meet at noon at The Green Man pub (another pub, of course) in the village of Fownhope.  I was 10 minutes late as I spent too long photographing the amazing views from the Iron Age hill fort known as Capler Camp.

Here’s Des, in the middle, next to his wife Rosemary, with their former Wokingham friends (now living in Abergavenny) Sue and Gerry. 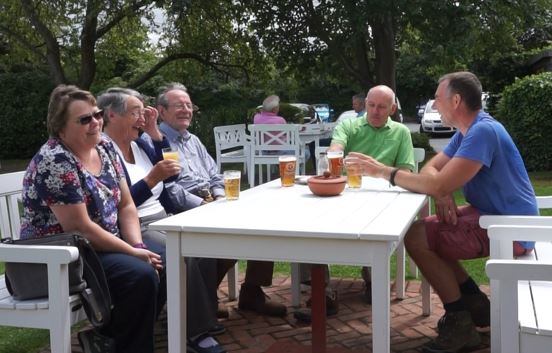 They were actually going to help me.  If you look carefully at the view from Capler Camp above, you’ll see the River Wye.  As well as being yet another AONB, the Wye Valley was a natural barrier than had to be crossed. 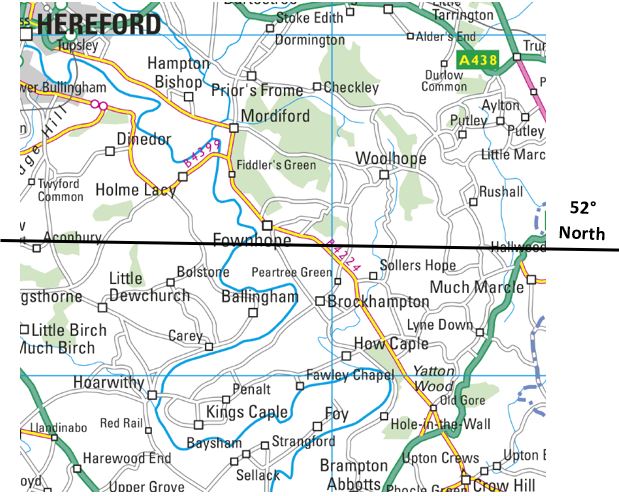 Looking at the map above, you’ll see there are limited bridges over this part of the Wye.  I could have walked several miles north to the bridge at Holme Lacy, or several miles south to the one at Hoarwithy, but where’s the fun in that?

I’m not being very strict about staying close to 52°N (unlike Nick Crane who was very strict in not diverging too much from 2°W), but I didn’t really want to deviate this much.

So, I’d arranged with Will Tucker who runs Hereford Canoe Hire to meet me with a boat on the east bank at Fownhope and take me to the west bank.  There used to be a ferry here, so we were only recreating history really. 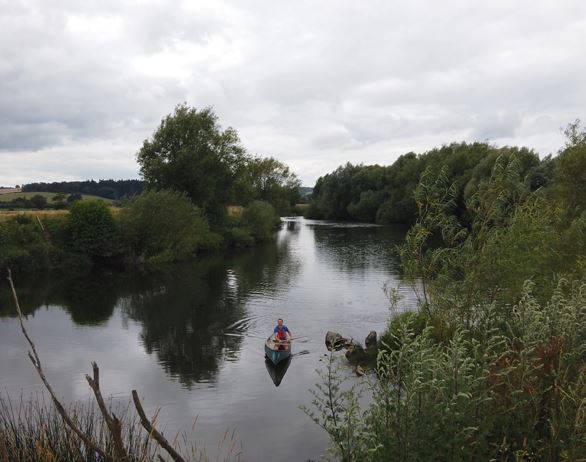 In the event, it was quite a warm day, so I thought: “Why don’t I ask Will to take just my rucksack across, and I’ll swim!”

So leaving the ladies at the pub, Des, Gerry and I walked down to the river, and they helped me get my stuff into Will’s canoe while I got in the water. 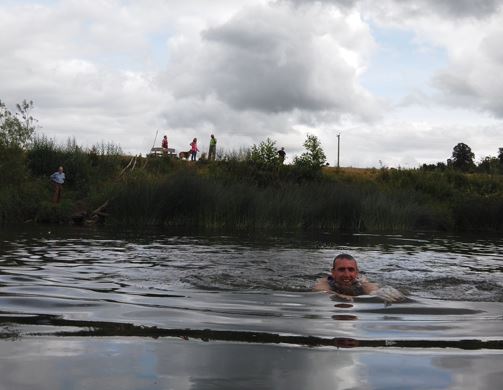 (There’s footage of my Wye swim, shot by Will in the boat, in the Week 4 Highlights Video.) 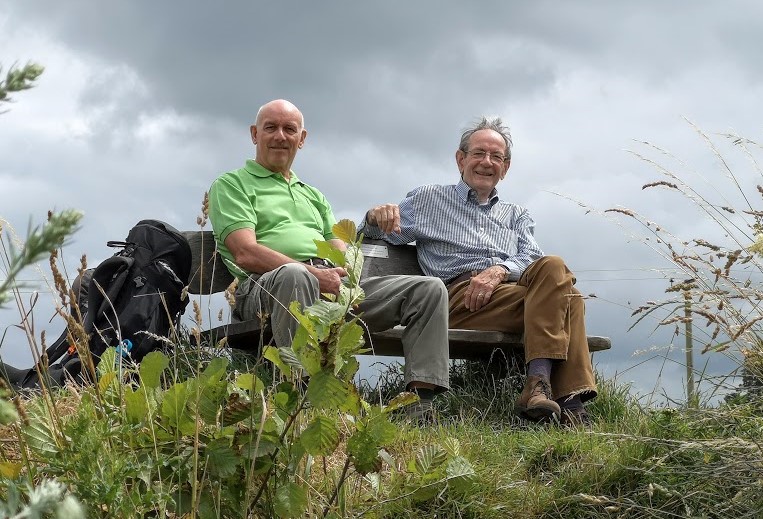 I am in awe of Des.  He is full time carer for Rosemary, who is unwell.  Through Pam & Sean, Des & Rosemary knew Heather well, and miss her just like we all do.  I didn’t have to explain to Des why I was doing this daft thing – he understood.  It meant a great deal to me that he came down to the river with Gerry to see me off, and I hope I was able to give him just a few minutes of silliness away from normal life, and some sort of positivity and hope. 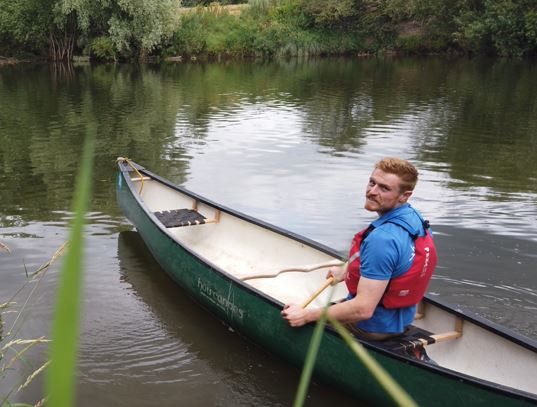 Pressing on.  My target for the day was Aconbury Camp, another Iron Age fort on the top of Aconbury Hill. 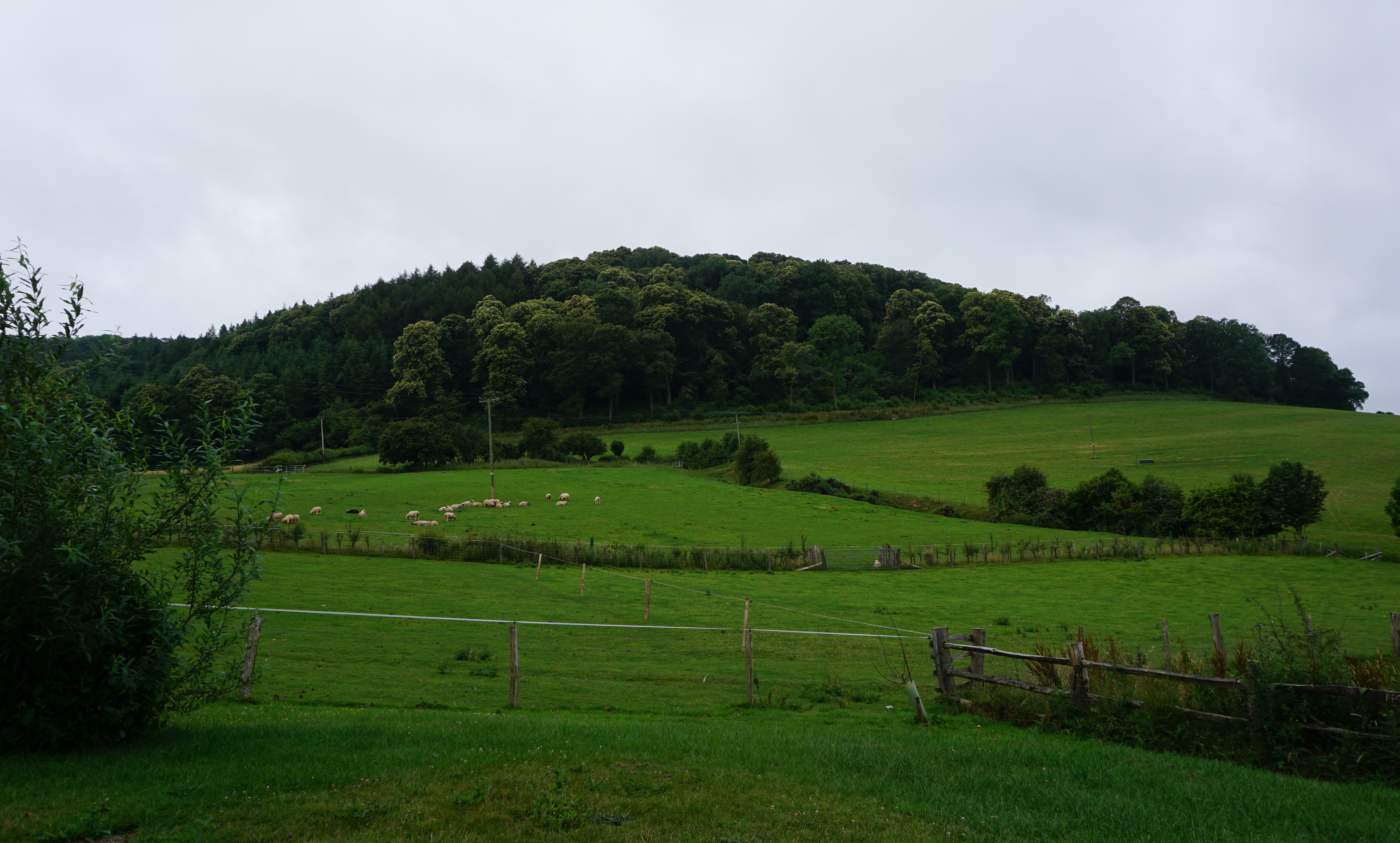 I have to report, though, that this was my first failed rendezvous on 52.  I had arranged to meet Herefordshire County Council’s archaeology adviser Julian Cotton to talk about the history of the fort.

But I’d spent just a little bit too long basking in my Wye swim, and eating the lovely packed lunch that Sue had made (thank you, Sue), and then the path completely disappeared – again! (see Friday’s update).

So I had to phone Julian and apologise, and we had a little chat about the Iron Age by phone.  Constructed around 2,400 years ago, Aconbury is a prominent hill with good views in all directions.

But there’s increasing evidence that Iron Age folk also lived down by the river too.  In fact, their use of the land was intensive, even then.  Drawing a parallel to today, it seems we don’t learn our lessons: we’ve always put our own needs above those of the natural world.

The difference today, which gives hope, is that we’re now alive to the fact and have the power to do something to redress the balance.  Whether we choose to is up to us.

One couple who are trying to strike the right balance between man and nature are Sam & Emily who run Kings Pitt’s Farm under Aconbury Hill.  They were my landlords for the night at the amazing Shepherd’s Hideaway. 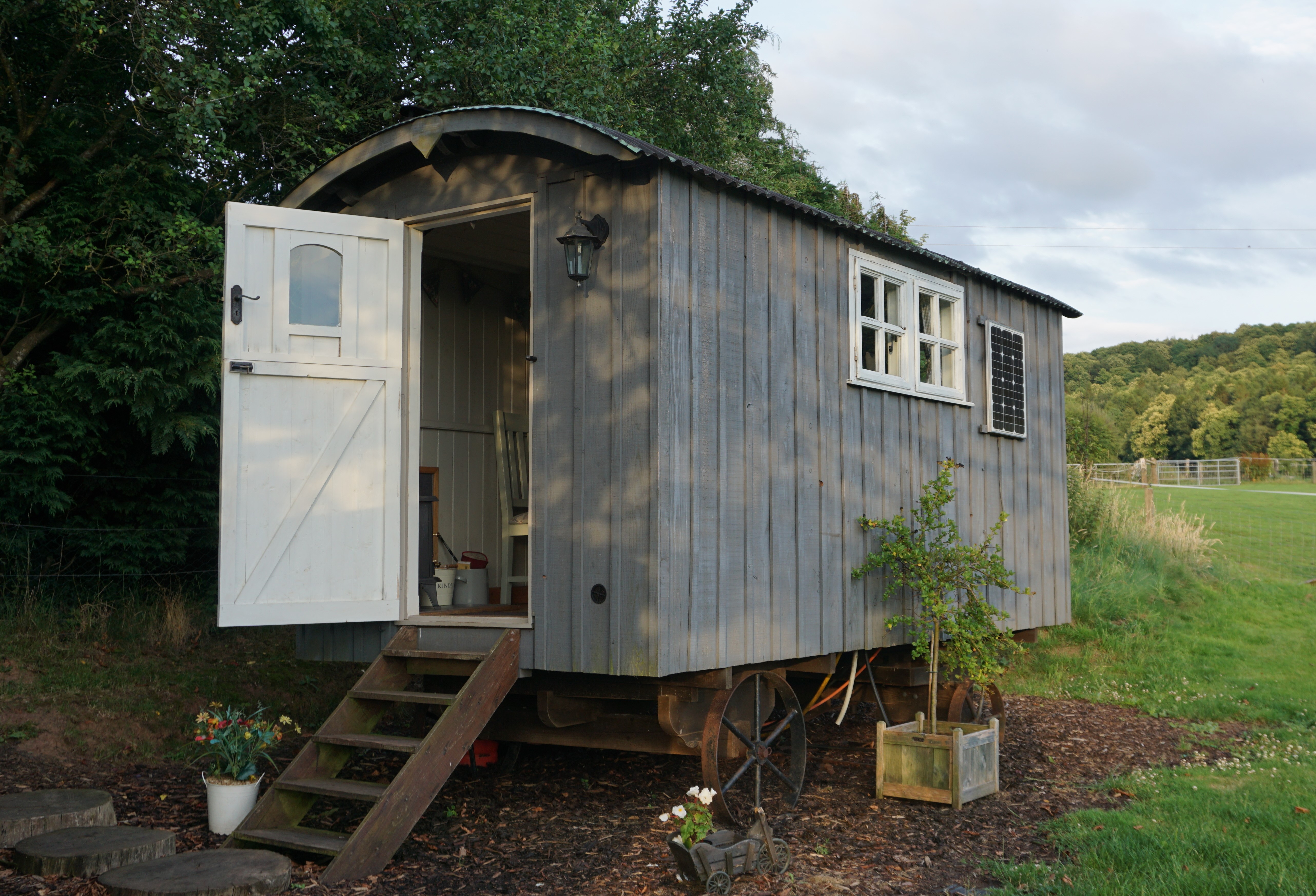 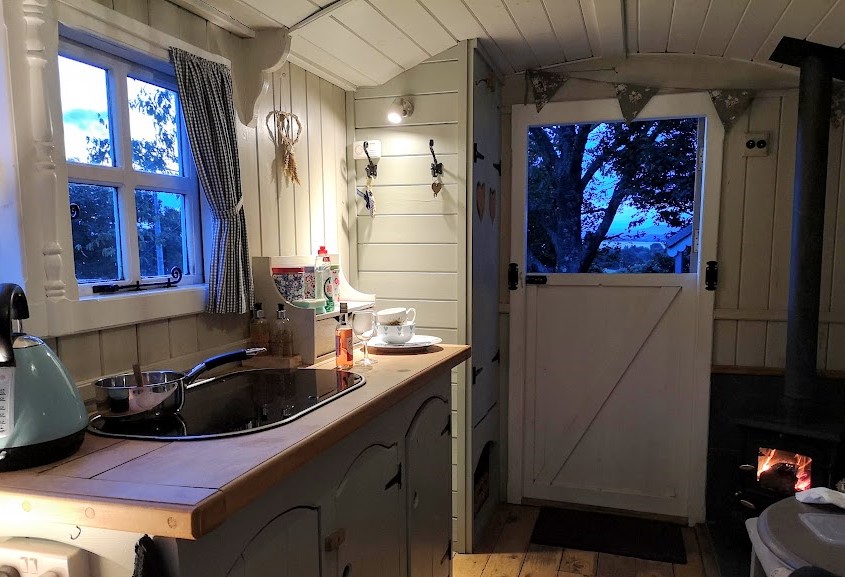 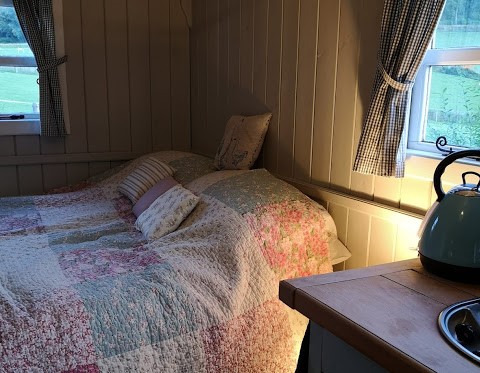 Sam & Emily are Duchy of Cornwall tenants with various diverse elements to their business plan, the shepherd’s hut being just one.  They did donate half the cost to my charities, though, which was absolutely lovely.

Having started the day with a Michelin breakfast, I ended it with some al fresco scrambled egg, made from Sam & Emily’s welcome basket.  Heaven. 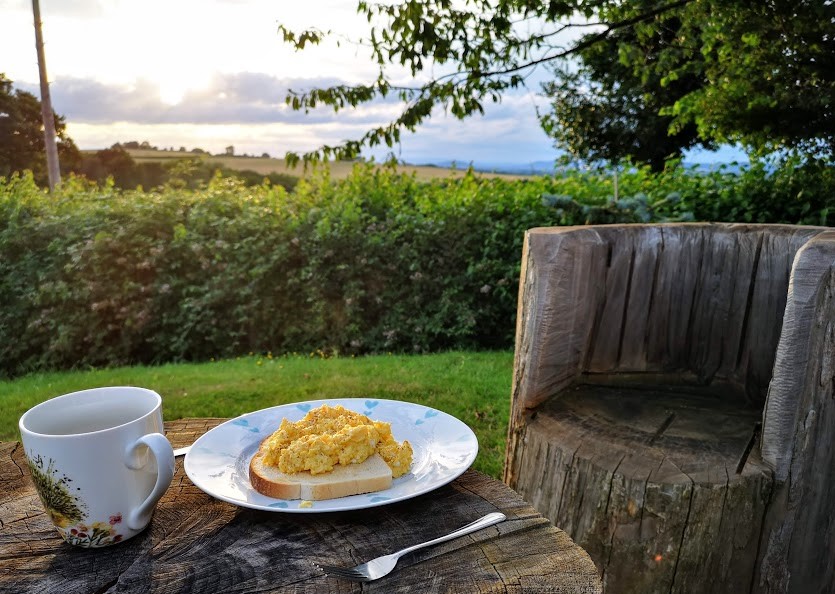