There’s something about halfway points.

Not just on long walks but in many things in life.

You’ve achieved 50% of your goal.  Got halfway through, overcoming any challenges or obstacles along the way.

But at the same time, there can be a sadness that, from now on, there’ll be less left than you’ve already had.

Often when planning 52, I’ve imagined the line across the country as representing the course of a life: starting with a sunrise (birth) in Suffolk, and ending with a sunset (death) in Pembrokeshire.

Where are you in your life?  Halfway?

For me, arriving today at the spectacular Broadway Tower (one of Britain’s outstanding viewpoints and the midpoint of my 52°N walk) felt a little like a midpoint in life.

Heather died aged 47.  My dad died last year at twice that age: 94.  If I live as long as him, then the walk so far could represent my life with her; the second half ahead without.

Standing at the top of the Tower today, I found myself literally looking back at where I’d been, and looking forward over the huge Vale of Evesham, across the River Severn and on to the Malverns where I’m going.  The past already walked, the future path to come. 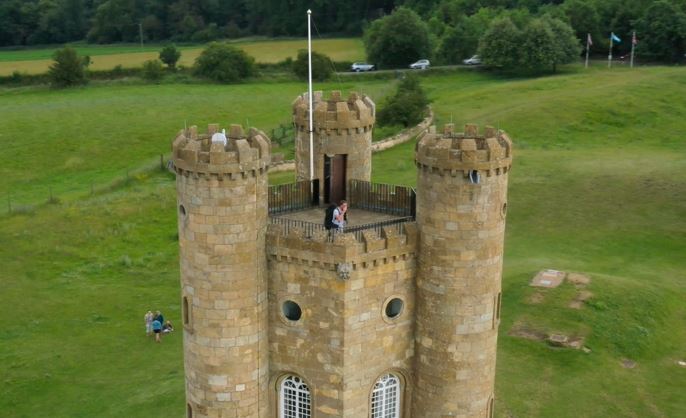 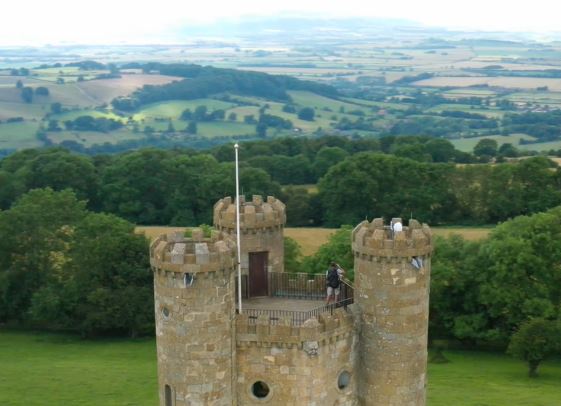 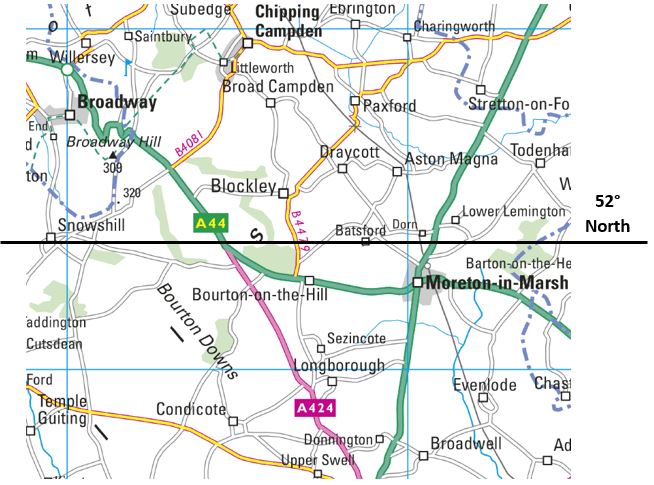 Roll back 22 summers to my 30th birthday.  Heather and I had booked a week at the National Trust’s Spring Cottage in Snowshill, our last summer break in Britain without children before Katherine was born in 1998.

On that birthday back in August 1997, Mum and Dad drove up from Wokingham to Snowshill for the day to help me celebrate.  And my brother David and his wife Ann also came up from Devon with their 20-month-old daughter Hannah for lunch at The Snowshill Arms.  Here we all are: 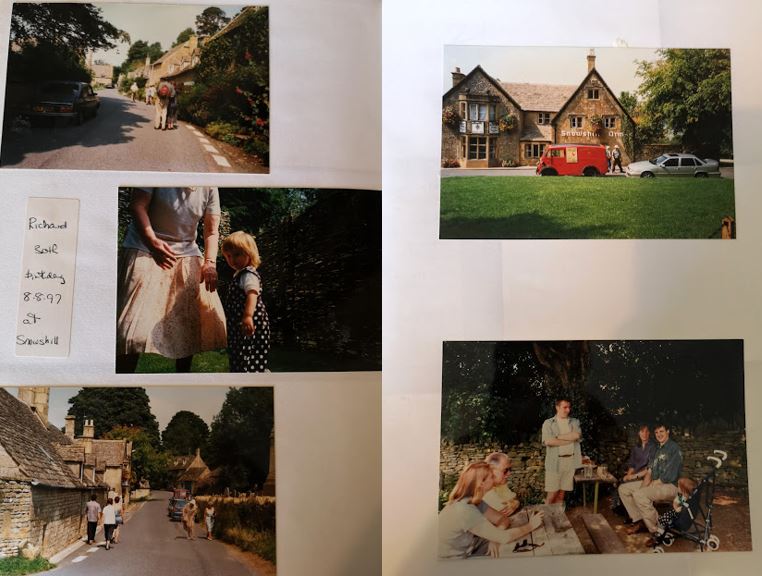 The above is an extract from Mum’s painstakingly compiled suite of photograph albums spanning many decades (one of the many things we’ve gone through as part of clearing their house after she and Dad both died last year).

On that morning in 1997, we visited the Falconry Centre based at Batsford Arboretum.  Here’s Heather with a bird of prey on her arm (please excuse Mum’s 1990s photo quality): 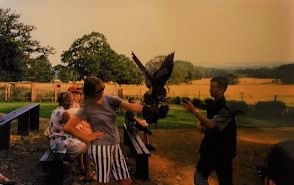 I’m dwelling on the past here as it’s all part of the really important process of looking back and remembering.  And being back in Batsford and Snowshill today, once again with David & Ann, was incredibly special.

The Falconry Centre’s still there, and thriving, but it was too early in the morning for me to pop in today.  But I did stop in at the Arboretum for a quick chat with Stuart Priest, the Operations Director for the Batsford Foundation. 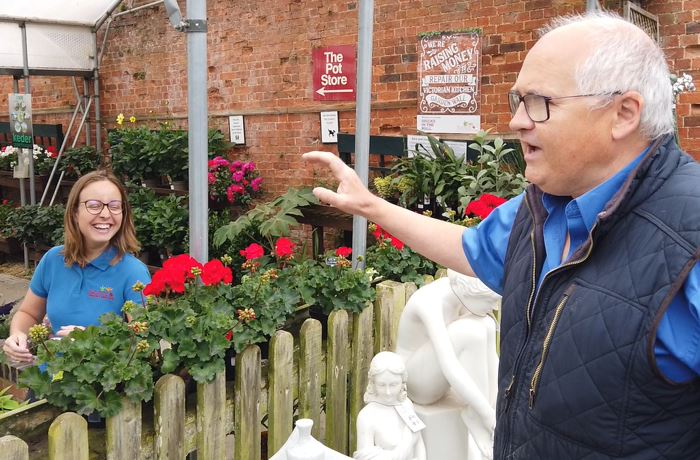 Stuart explained to me how the Arboretum is an internationally important, unique botanical collection of trees from all around the world, spread over 60 acres on the sloping Cotswold scarp.  It is maintained through a charitable foundation, with revenues for the Arboretum’s upkeep coming from gate receipts, a plant centre, café and accommodation. 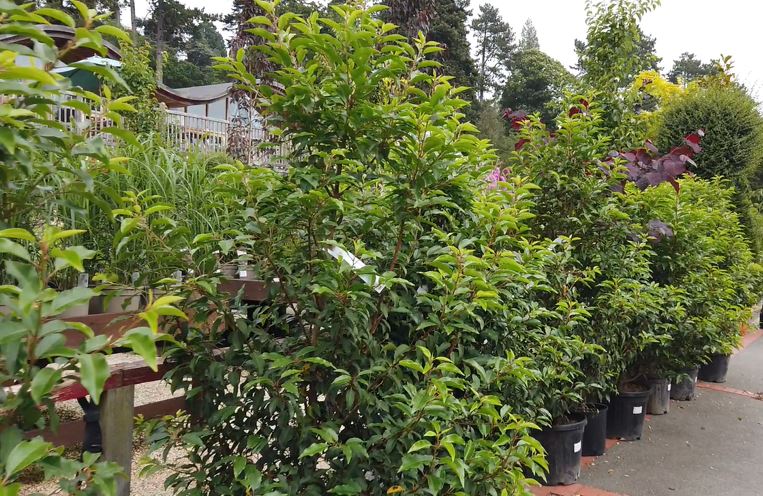 They also focus on education and conservation, including receiving about 700 children a year at their education centre and forest school.  This is exactly aligned with the work of my chosen charity The Wilderness Foundation in Essex (see Charities).

Batsford is certainly a beautiful, tranquil part of the world.

Walking on I met up with David & Ann, their daughter Naomi (known as Gnome) and my son Adam.  We walked down into Blockley for coffee and cake at the excellent Blockley Café. 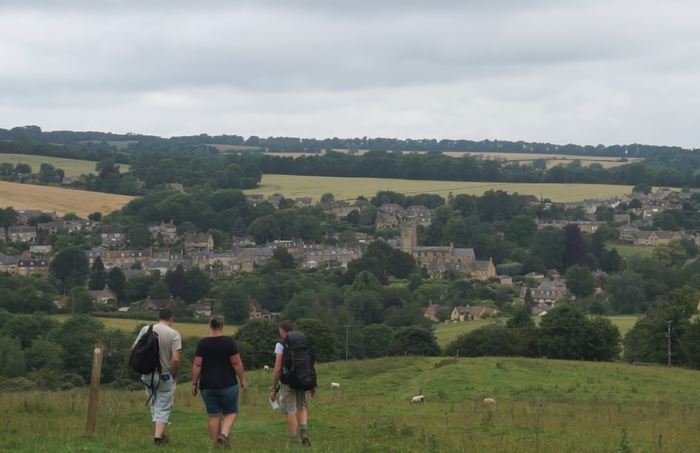 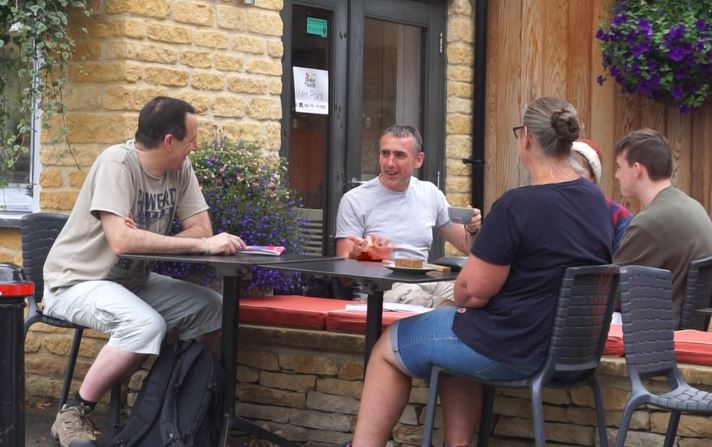 Adam and I then walked on alone.  We saw the Red Arrows fly past, en route from RAF Brize Norton to their display at the F1 British Grand Prix at Silverstone.  You can just see their smoke trails here: 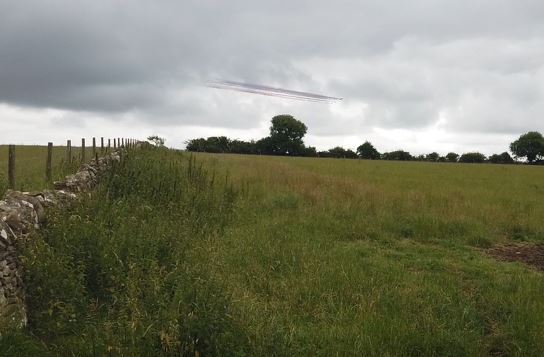 Reaching the edge of the limestone Cotswold Hills at Snowshill, the fabulous view I mentioned above came into sight.  (If you think you recognise the church, it might be because Snowshill was used as the village where Bridget Jones’ parents lived in the 2001 film.) 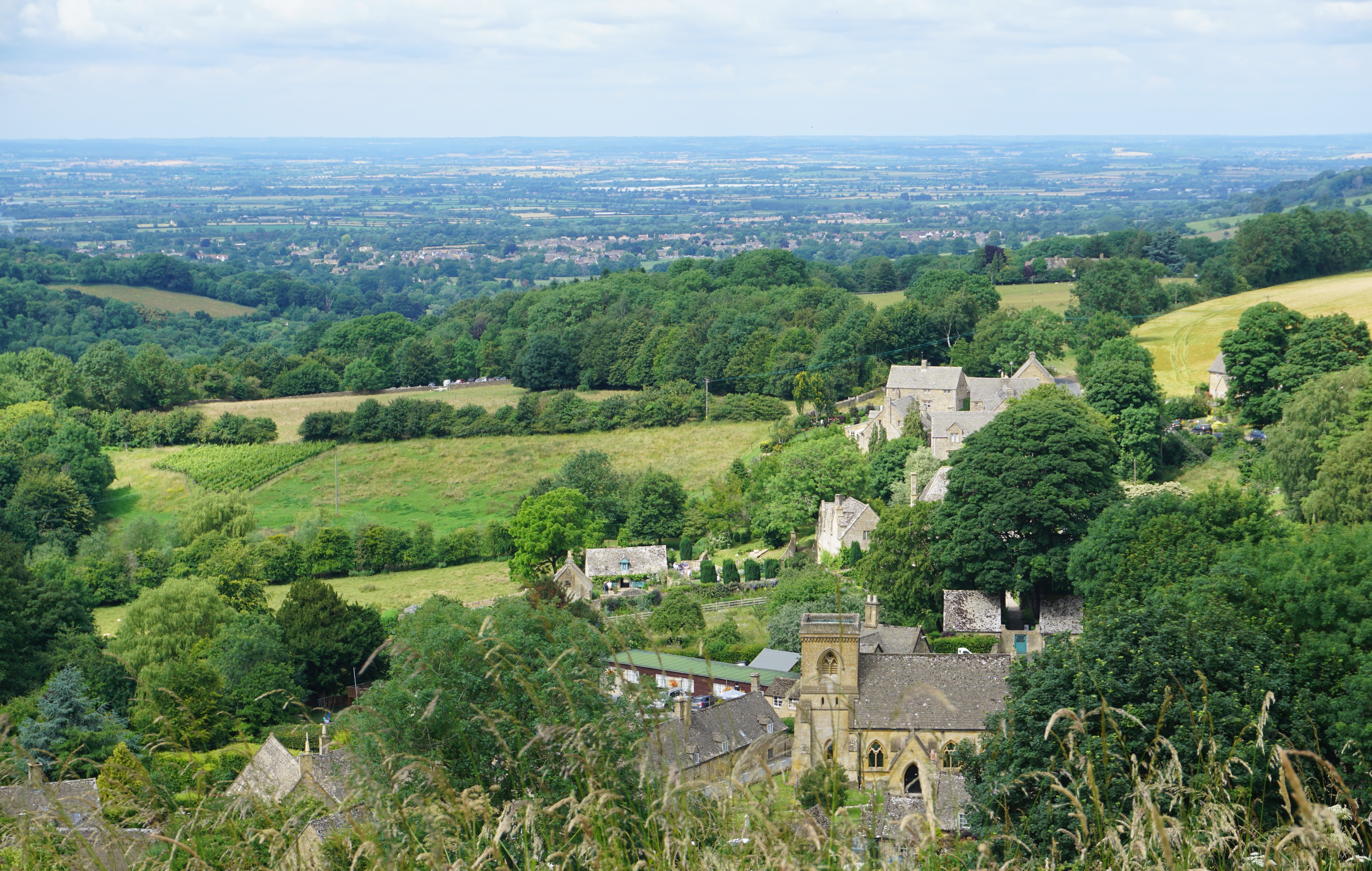 Ending the day at Broadway Tower, we met up with Olly and Duncan from AERO-i in Gloucester who did some aerial filming for this week’s highlights video (coming later this week). 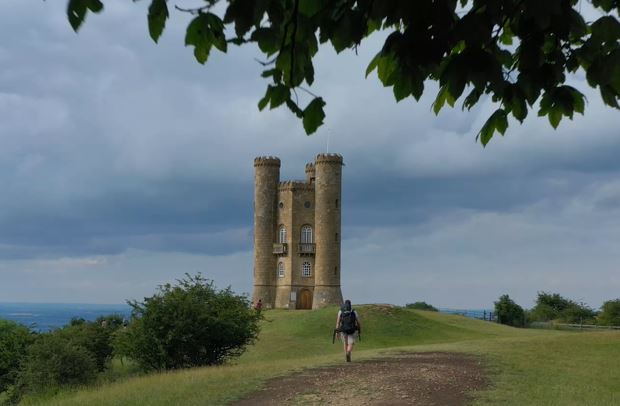 So that’s halfway.  Memories, both old and new, are behind.  The future, unknown, path is ahead.

As you may have sensed if you’ve read others of these daily updates, I miss Heather all the time.  But she’s in the past – on the walk through life to date – and the rest of the walk (and life) is ahead.

Heather’s life goes on in a way through her three children.  On Monday I’m taking them to the airport for a short trip together to Copenhagen.  I think she’d’ve loved that.

And my route forward, at least for now, is clear too.  From the Tower I could see Hay Bluff in the Black Mountains above Hay-on-Wye in Wales, about 50 miles away.  This is where I’m headed in Week 4; my path ahead, mapped out and starting again on Thursday.  See you then.

Thanks so much for reading.  Your feedback and support means so much to me.  Richard x