One theme that keeps recurring on 52 is the passage of time, and representing time on a line.  As well as zooming in and out on that line.

My straight line walk across Britain lasts 32 days.  This was Day 30, so in the last three days.

Back at the halfway point of Broadway Tower, you may remember I compared the line across the country to a lifetime.  If 32 days represents a life, then I guess you could see the last three days as retirement, approaching the end of life.  A period of peace and reflection.  And Pembrokeshire is custom-made for reflection.

Back at the Welsh border, you may remember I zoomed right out to 52’s geological timeline: 500 million years from east to west.  But even that wasn’t properly zooming out.  Look at this amazing geologic clock from Wikipedia: 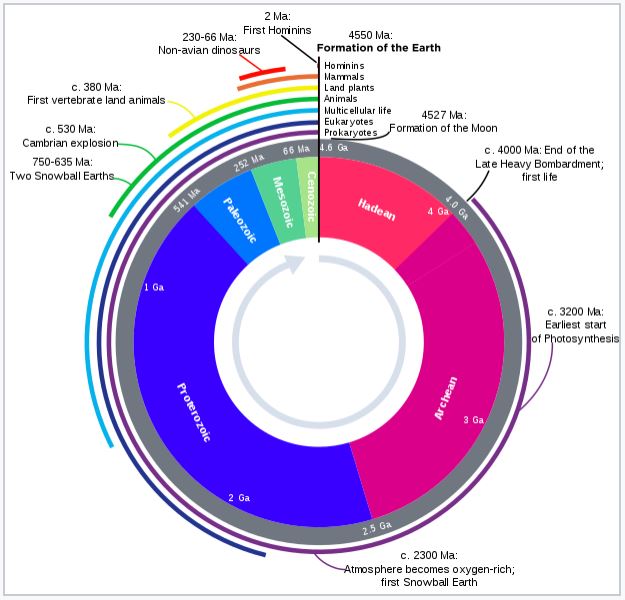 The 500 million years (500 Ma) of 52’s geologic timeline is just one ninth of this and is represented by part of the green line at the top left of the clock (see the “Cambrian explosion” at c. 530 Ma).  In clock terms, this is something like the last seven minutes of the hour.

But then humans, or rather our Homo erectus ancestors, have only been around for about 2 million years (2 Ma).  On the clock, this is the last 1.5 seconds of the hour.

So just to reiterate: if the earth had existed for an hour (i.e. one revolution on the clock face), then humanlike animals would only have been around for the last 1.5 seconds of that hour.

All of human history, from the emergence of the first Homo sapiens, to cavemen, the Iron Age, the Romans, Kings and Queens, the industrial revolution, two world wars, Snapchat: all of this has happened during these 1.5 seconds (and actually most of it has happened at the very, very end of these 1.5 seconds).

For me, this sort of thinking is all about seeing ourselves in context and putting our short lives into perspective.  But it’s also a bit bewildering, so let’s zoom back in to something a bit more relatable.

How about 5,000 years?  That’s when the burial chamber known as Pentre Ifan was in use. 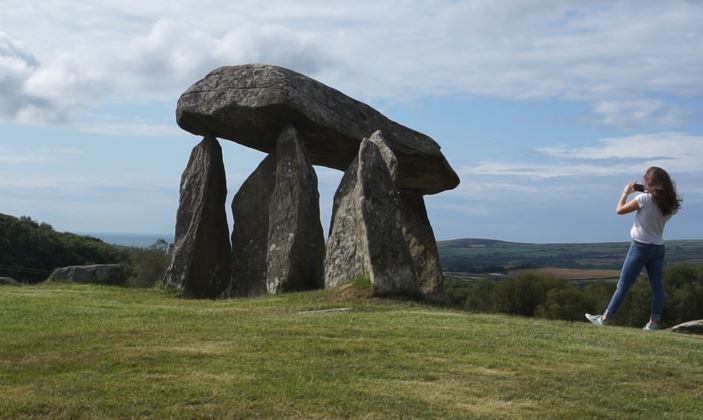 This is the best known megalithic monument in Wales, and it’s right on 52°N, at the end of today’s walk.  It’s a very, very special place for me.  I’ll try and explain why.

5,000 years is about 200 generations (or maybe more), but let’s just think for a moment about the last three of those generations:

2016 – on my final trip away with my mum, Sheila, before her cancer developed in 2017, we visited Pentre Ifan whilst staying in south Pembrokeshire at Manorbier: 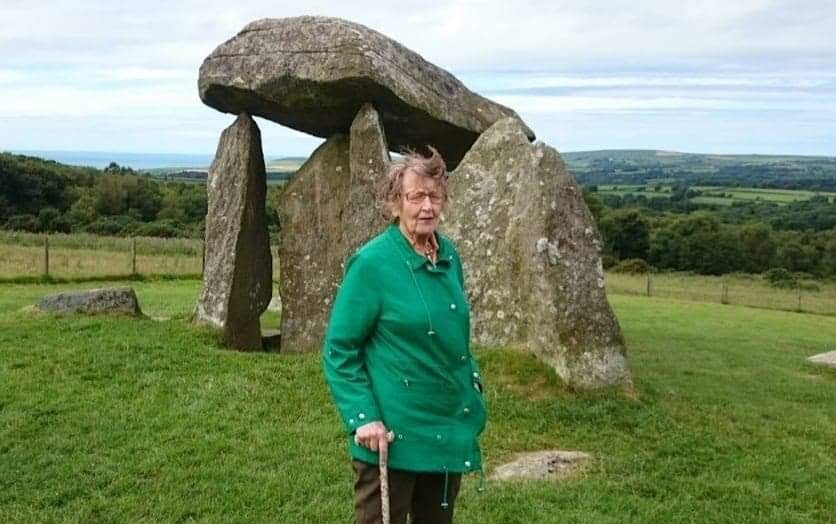 2013 – on our final family summer holiday with Heather (after staying with the Orricks at Glasbury), we travelled on to Pembrokeshire to visit our friends the Ridgways and again visited Pentre Ifan: 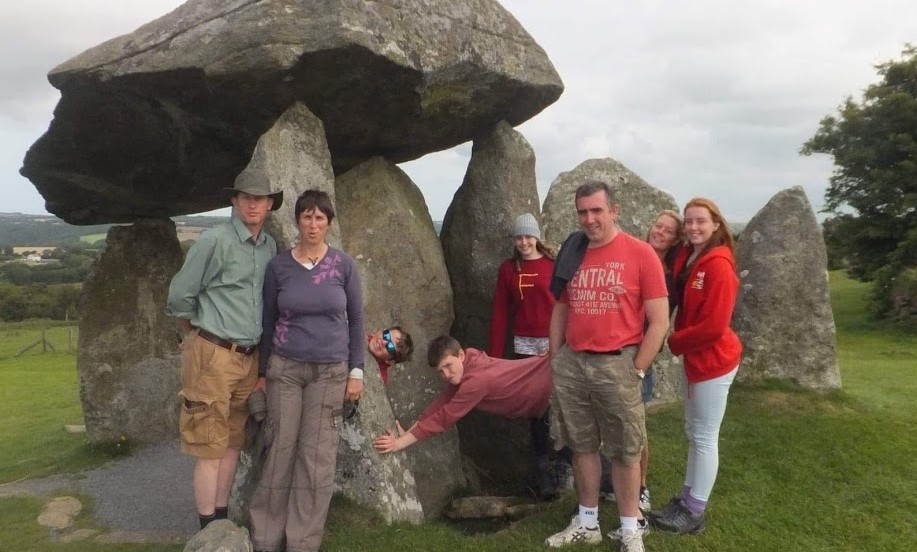 (Look Felicity does actually exist! – she’s the one with the F jumper like Harry Potter.)

I have personal experience of the love between mother and son, and mother and daughter, in these three generations.  But that same love has existed within each of the previous 200 generations.  I love to imagine these generations as a continuous line, from parent to child, then becoming a parent themselves, cascading down through the centuries and millennia.

(I’ve had similar thoughts passing through each of the dozens of village churchyards I’ve encountered on 52, thinking about all the centuries of folk who’ve come before.  I wonder what future generations will think about us when they reflect back on the early part of the twenty first century?)

This, for me, makes the connection back to the longer geological timescales.  Our own lives can seem just a tiny spec on a geological timeline.  But each of our lives are a crucial link along that line.  Each life is a dot, but it’s the huge series of sequential dots that together make the line.

When we think about lives in this way, as essential links in a long, long line, it adds extra importance to what we choose to do with our time on earth.  Several folk on 52 have said to me that we’re merely stewarding the planet for whoever comes next.

This has been my motivation for choosing three charities which focus on sustainability.  The world (and its future) is bigger than us, but we are a key component of it.  Does that even make sense?

Finally, on the “thinking longer (and bigger) than ourselves” point, I was so excited back at Bronllys Well Being Park to learn that Wales is the first country in the world to appoint (in 2016) a Future Generations Commissioner, Sophie Howe (pictured below at Hay-on-Wye). 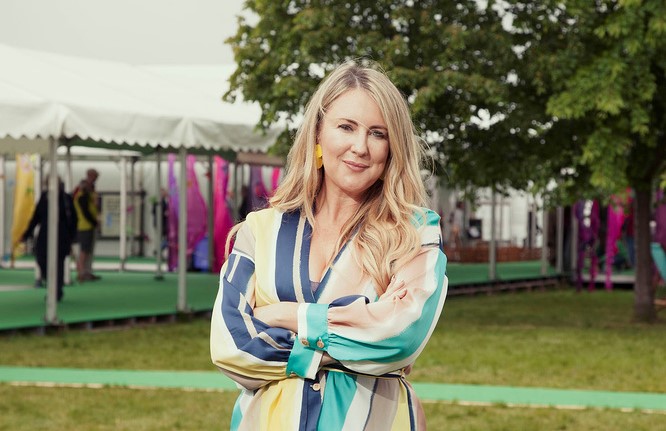 To me, this is incredibly exciting!  The UN has said: “What Wales is doing today, the world will do tomorrow”.  I really want to learn more about Sophie’s role and how Wales is thinking bigger than now, solving problems with regard to future generations as well.

Told you Pembrokeshire makes you think!

Right, enough of all this hifalutin stuff: to finish let’s zoom right in to two wonderful examples of humanity right here and now, at the start and end of today’s walk. 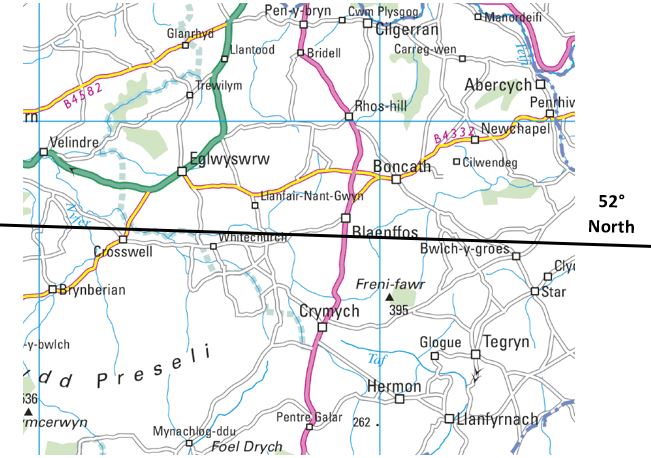 I started out from the village of Star, staying at the amazing Falls Bed and Breakfast.  Over the last six years, Michael and Mie Mie (originally from Thailand) have renovated the place from near ruin to a wonderfully comfortable home with an incredible garden.  The sheer quantity of sustained human endeavour that’s gone into this, including re-routing the stream(!) in the garden to prevent flooding, was once again awe-inspiring. 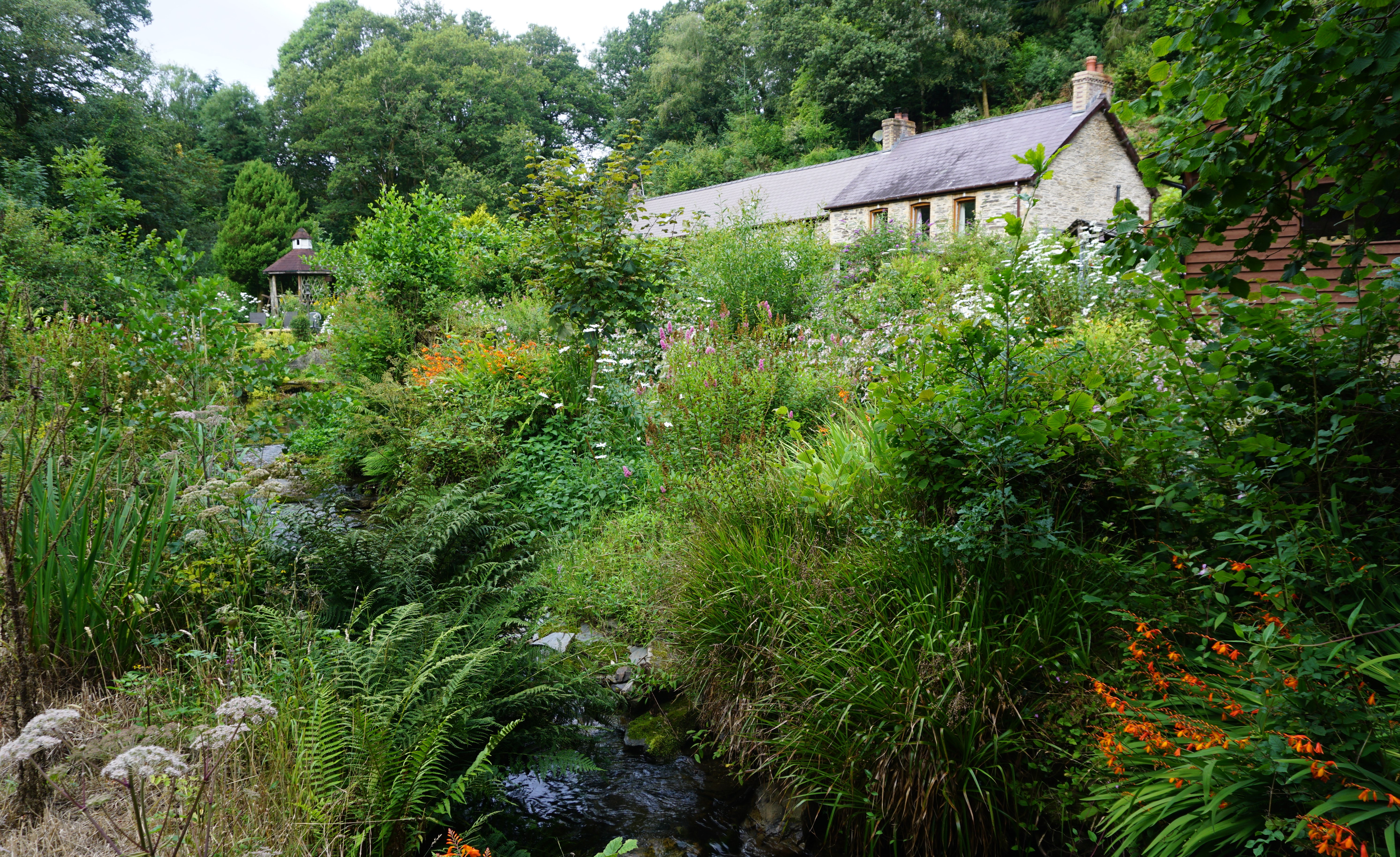 Walking under the awesome Preseli hills during the day, I glimpsed the sea (for the first time since I left the Suffolk coast on 25 June). 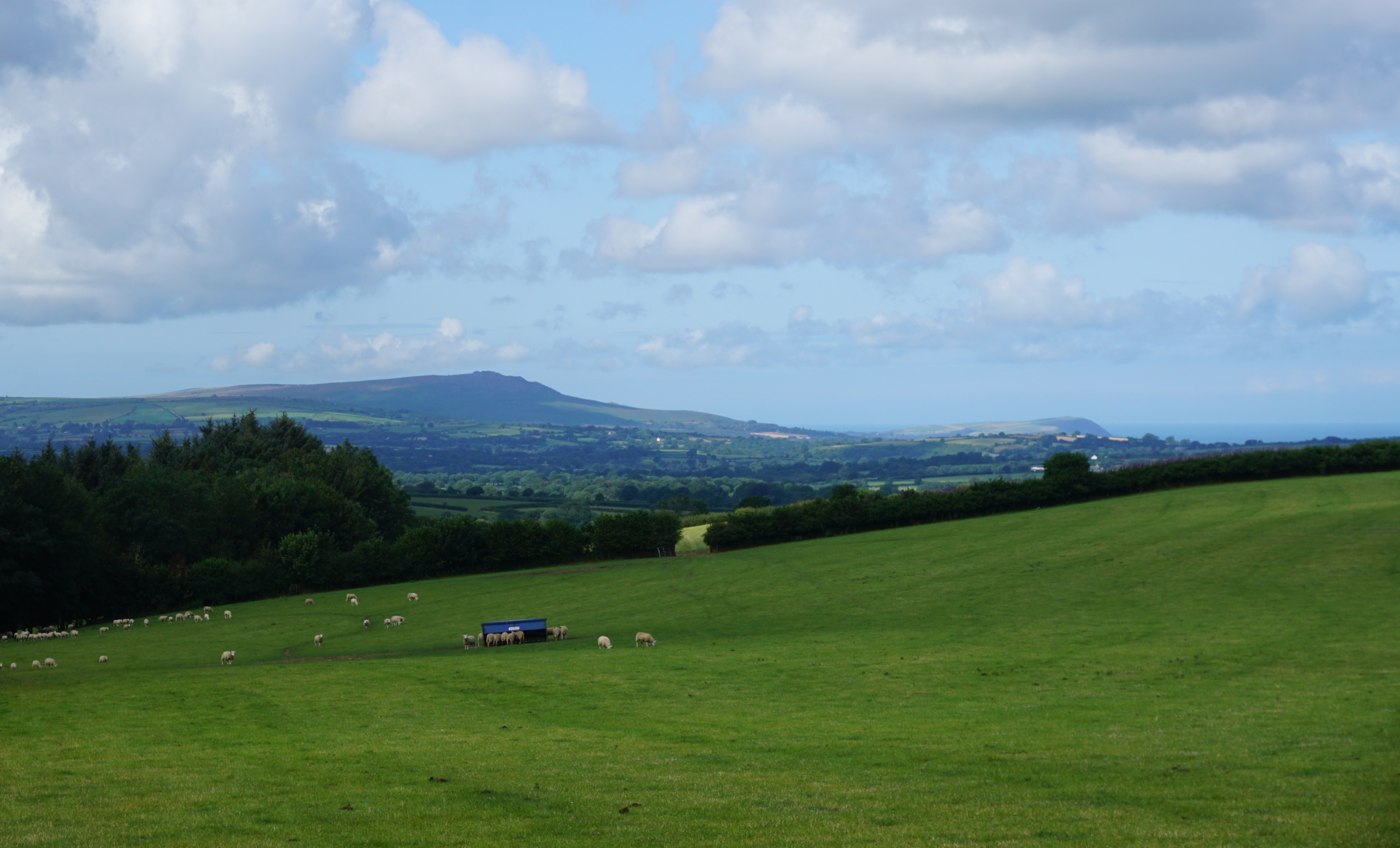 To me seeing the sea is exciting because we see it so rarely living in Berkshire, but to Pembrokeshire folk (like my friends the Ridgways), you can pop to the sea any time.

And that’s exactly what Roger did with me this evening.  After arriving at The Salutation Inn at Velindre, Roger picked me up and took me to the beach to meet the family (they come as a 10 – I’ll tell you all about them tomorrow and the day after) for hot pasta and bolognaise that Moira had brought from home. 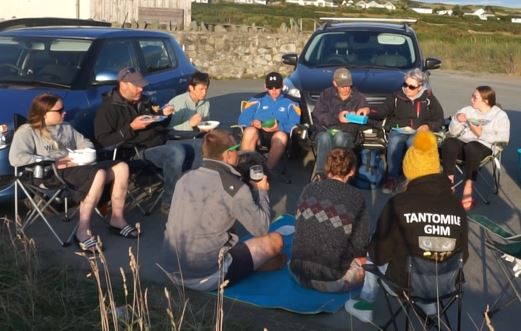 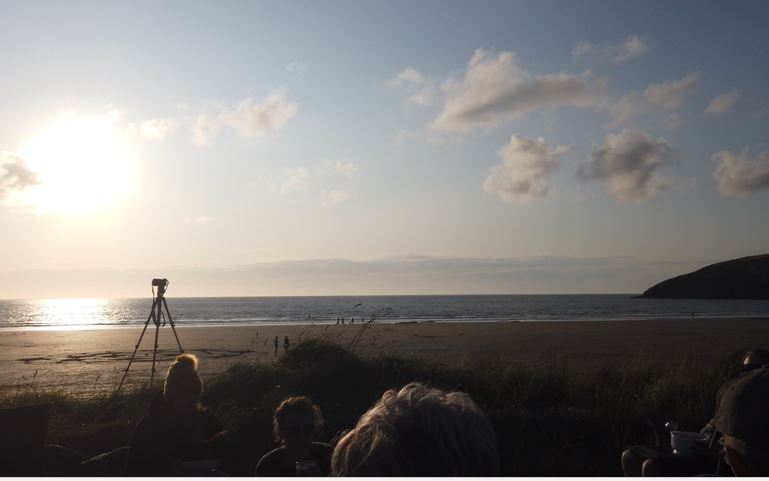 To me this was a really special way to spend the evening, but in Pembrokeshire, it’s just what you do.  Well, if you’re as lovely as the Ridgways and the Maycocks it is.  Really looking forward to sharing more about their world over the last two days of 52, tomorrow and the day after.