As I write this, it’s potentially going to be Britain’s hottest recorded day ever.

Cast your mind the long way back to Friday.  Wet, wet, Friday.

The sixteen days of walking on 52 up to Friday, from Suffolk right through to Gloucestershire, had all been fine and dry.  How lucky!  But it couldn’t continue.

There had been a lot of rain during the night.  So the fields were wet.  I think I’ve explained on here before, or certainly shown in the videos, that much of the walk goes through the middle of crop fields.  When the path is narrow and the crops are very wet, your whole lower body, including your shorts, socks and boots (inside and out) are soaked within 10 paces.  Together with the rain, this meant that, within minutes, I was completely drenched.

There was also quite a long day’s walk ahead, to Rye Street near Birtsmorton. 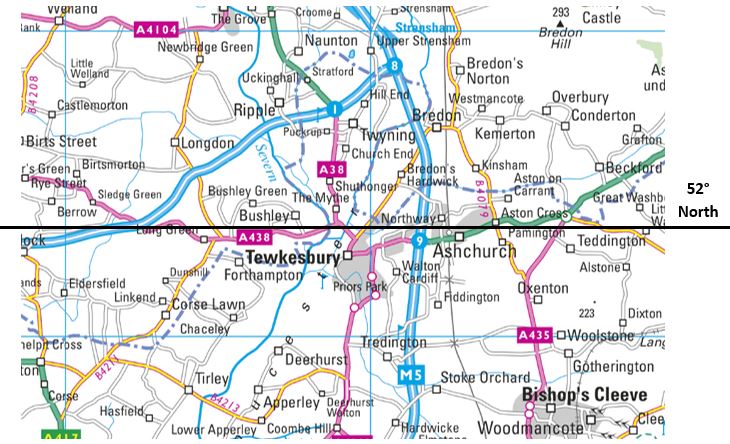 (Btw, can you see how the 52°N line has reached its lowest point, in the middle of Britain, and is now starting to turn up again as it heads to Wales?  A gentle smile across the UK 🙂 )

There aren’t any photos from Friday morning I’m afraid as I was keeping the cameras well wrapped and dry.  Again, how lucky that I’d been able to photograph the previous 16 days?

Fair to say, as I tramped in soaking clothes, socks and boots, I was pretty miserable.  However, as the day developed, four separate things combined to hugely lift my spirits:

1. Arriving in Tewkesbury with its high street shops
2. The unbelievably warm welcome of the Abbey community
3. The support of family and friends on Messenger and WhatsApp
4. The kindness of my B&B landlady and the pub round the corner.

Tewkesbury
Never has a wet walker been happier to arrive in an ancient place of habitation. 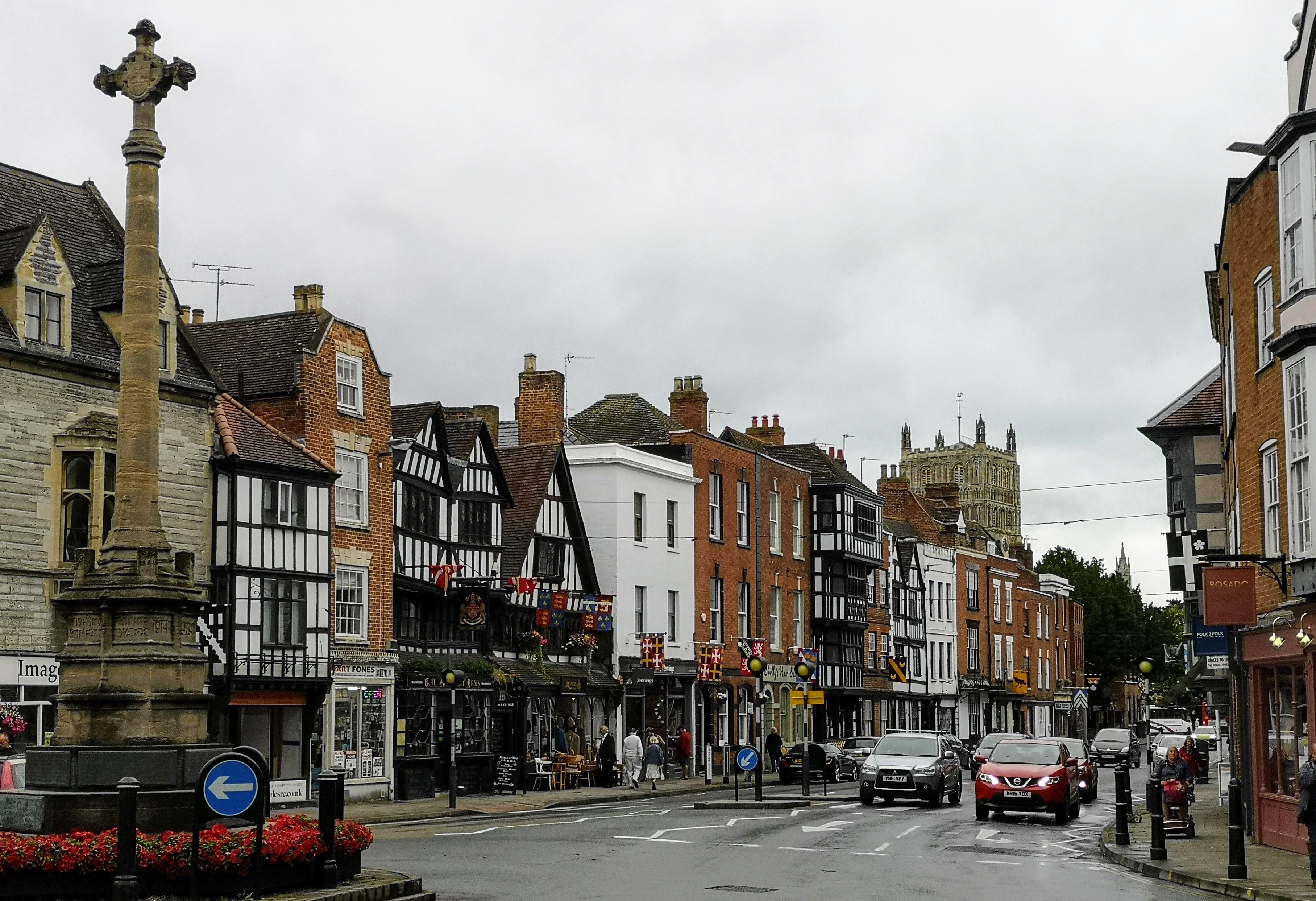 Thank heavens for the Tewkesbury branches of M&Co and Edinburgh Woollen Mill who kitted me out with dry clothes. 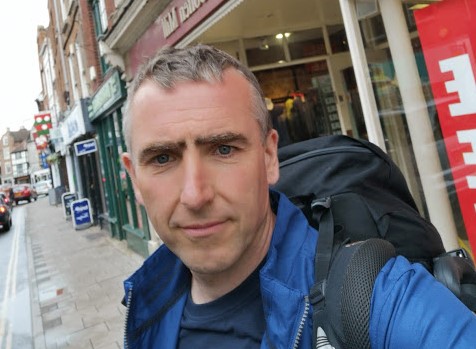 The Abbey community
Feeling much more comfortable, I walked to the Abbey where I’d fixed up to meet with the Vicar, Father Paul Williams.  If you’ve visited Tewkesbury Abbey, you’ll know that this amazing example of Norman architecture, founded by William the Conqueror’s cousin in 1087, is just awe-inspiring. 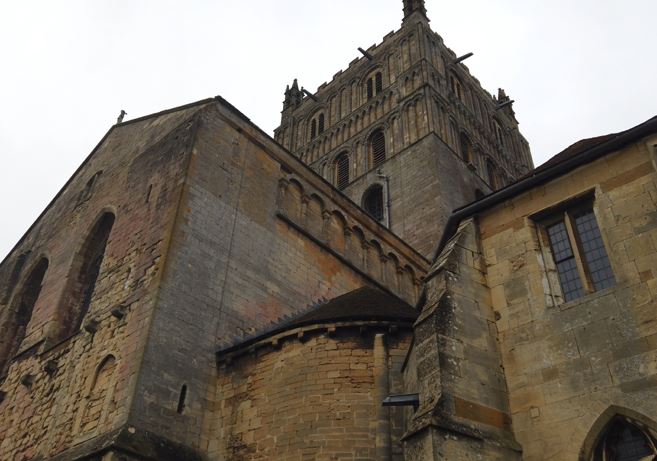 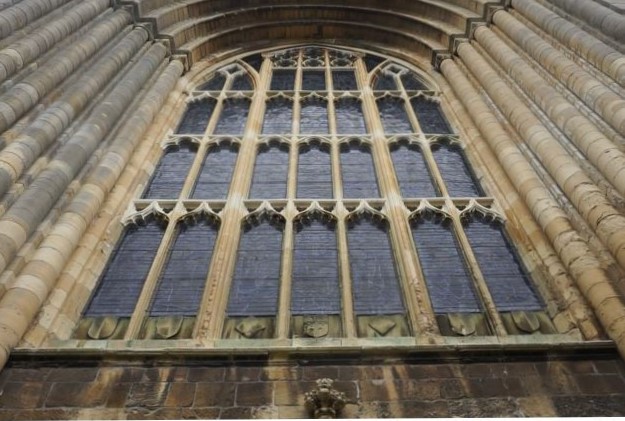 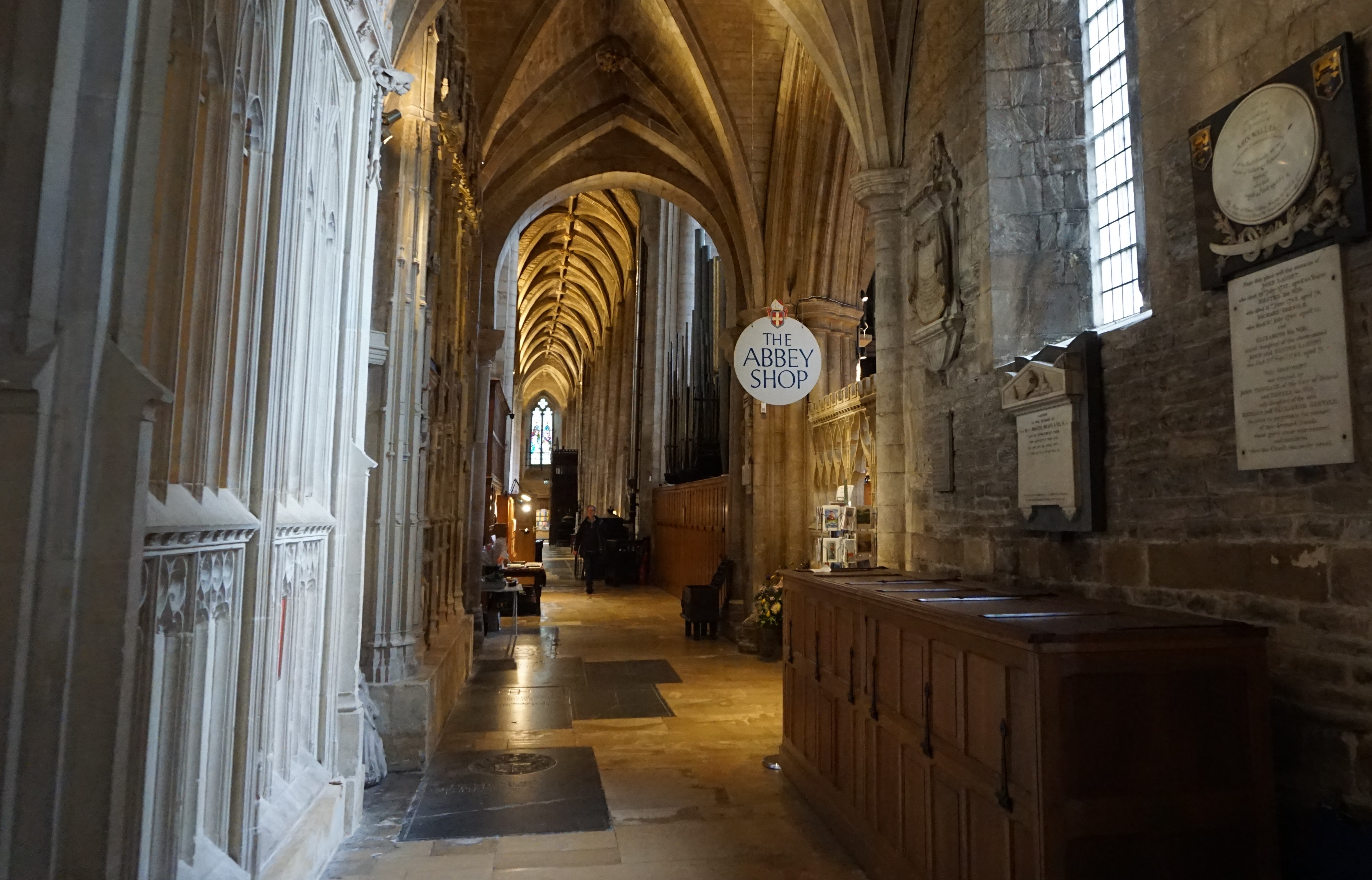 But equally, if not more, inspiring for me was the welcome I received at the Abbey.

Paul gave me a personal tour of the Abbey and we had a wonderful conversation, not so much about the fabric of the building, but about the spirit of its founders, and the “Rule of Benedict” which they followed.

One element of this ancient thinking was the notion of community stability, or in Latin, stabilitas loci.  This is the sense that, despite near term pressures and challenges, people working together in partnership will always endure, bringing out the best in each other to achieve great things.

I felt this was reflected in the very stones of the Abbey, which will shortly celebrate 900 years of consecration in 2021.

I was fascinated by Paul’s discussion about Benedict and want to find out more.

Paul then said that they were having a buffet lunch to mark the retirement after 13 years of one of the Abbey’s Vergers, John Caines, and would I like to come along.  I was overwhelmed. 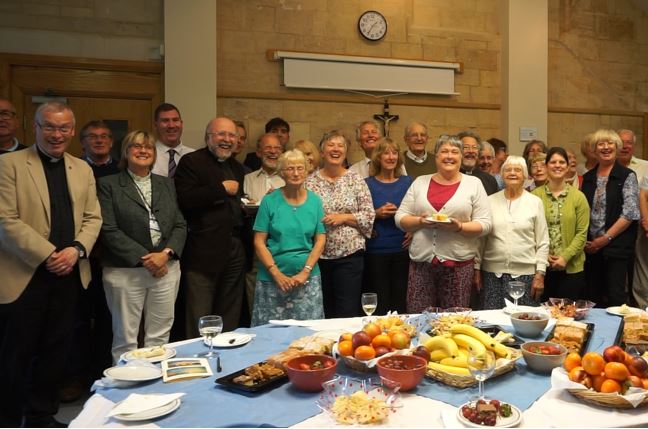 (Paul is on the left and John is in the middle at the back, to the left of the cross)

I felt so welcomed and had some lovely conversations with several of the Abbey community at the lunch.  They were all interested in the walk, but I was interested in what Tewkesbury meant to them.  A key theme I heard: community, with a strong heart at the centre (in this case represented by the Abbey).  We haven’t heard the last of this theme, I’m sure.

Family and friends
Two o’clock, walking on, refreshed and with a renewed sense of hope, I cross the River Severn (at the western edge of Tewkesbury) into Worcestershire, via the Mythe Bridge (designed by Thomas Telford, opened in 1826, construction cost £14,500): 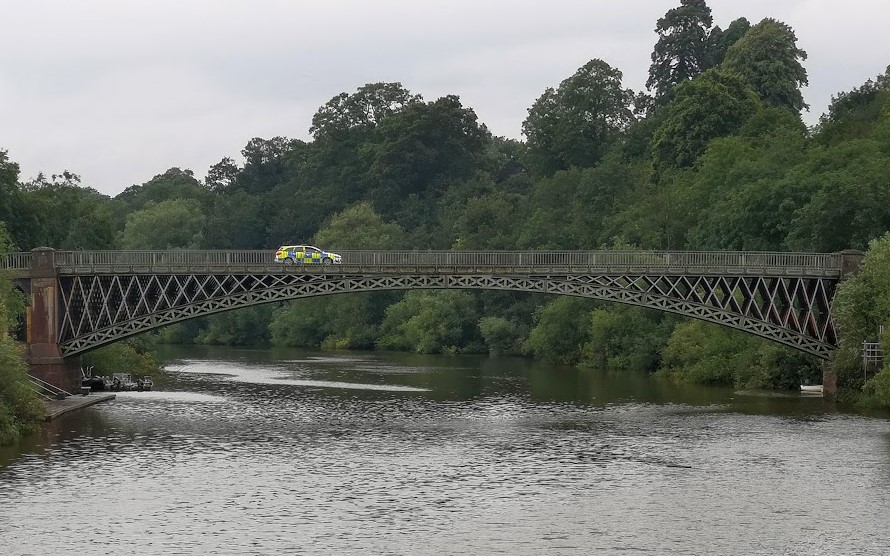 My bag is heavier now though, laden with wet clothes.  And it starts to rain again.  Hard.

Many of the paths on 52 aren’t there.  This isn’t a waymarked long-distance footpath, like The Pennine Way, it’s a stringing together of tiny footpaths as close a possible to 52° North.

For example, here’s the Tewkesbury map complete with rain smudge.  This is sheet 50 of 90 that I’ve made spanning the whole country. 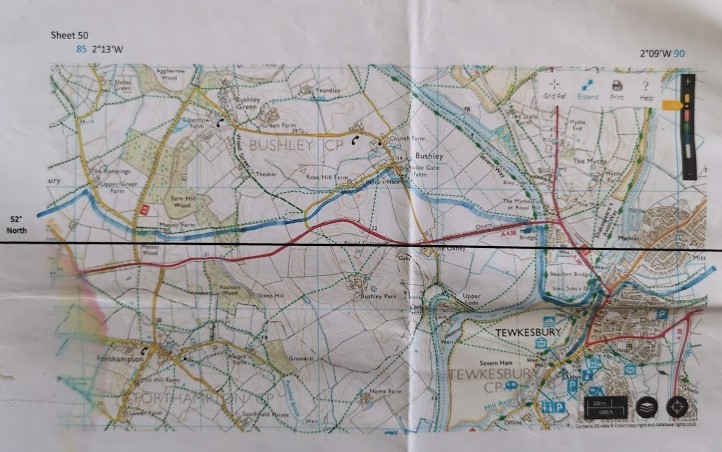 The black line is 52°N and the blue line is my route following footpaths and minor roads as close as possible to the 52nd parallel.

But, as I say, a lot of these paths (green dashed lines on OS 1:25000 Explorer maps) just aren’t there.  Either they’ve become overgrown, or crops have been planted over them, or maybe they were never really there at all.

What this means, as those who have walked with me have discovered, is that constant diversions are required, sometimes to roads (which I try and avoid at all costs).

On Friday afternoon the paths disappeared frequently so I ended up walking on A roads, in the heavy rain, without any pavement, and with cars driving by at great speed and creating lots of spray.  Not nice.

But just as Paul and the Tewkesbury Abbey community had buoyed my spirits earlier, four virtual communities kept me going during this tricky afternoon.

WhatsApp messages of encouragement and support (“Keep going Richard – you can do this”) came in from Adam & family in Spain (remember him from Suffolk?), from Roger & family in Wales (you’ll hear a lot more about him as I approach Pembrokeshire), and from my Wokingham friends who’ve set up a WhatsApp group for 52 updates (including Sean and Andrew who walked with me last week, and Darren and Steve who’ll walk with me tomorrow).

The fourth community was “Smith Sibs”, that’s the Messenger group of my brother David and his wife Ann (Woburn and Broadway), my sister Eleanor (Wales next week) and myself.

Smith Sibs has been a wonderful, if sometimes slightly nerdy, support for all three of us as our parents became ill and died last year, and also as we cleared their house and were able to share with each other all sorts of discoveries.

Sibs is also renowned for David’s terrible puns.  This is the sort of thing Ann, Eleanor and I have to put up with – awful, but keeps you going: 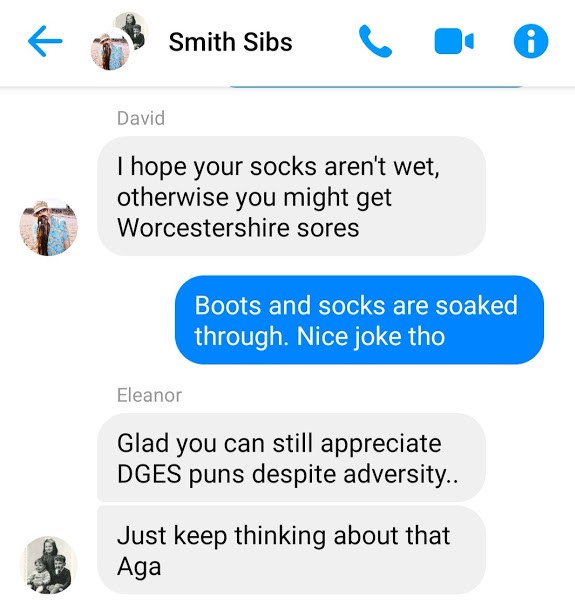 Mary’s and Will’s kindness and hospitality
The Aga Eleanor’s referring to was at that night’s B&B.  I’d phoned ahead to Mary at the lovely Brook House Bed & Breakfast to say I’d be later than planned (due to path diversions) and also that I was soaked through.

Mary said: “No worries, we’ll put an airer in front of my Aga to dry your things.” 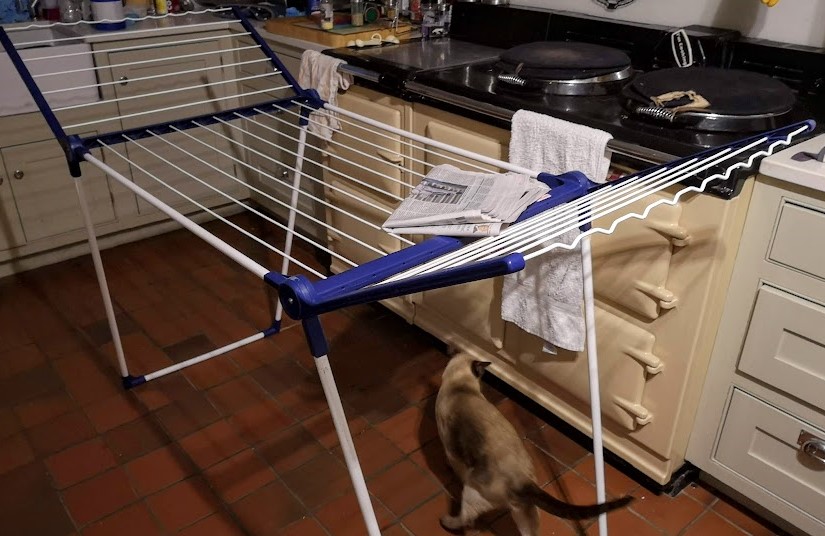 Mary also phoned the pub round the corner (the Duke of York) to check they’d be able to feed me.

When I arrived at the Duke, Will the barman had saved me a corner table (where I could steam away quietly) and also bought me a pint – how lovely are people?! 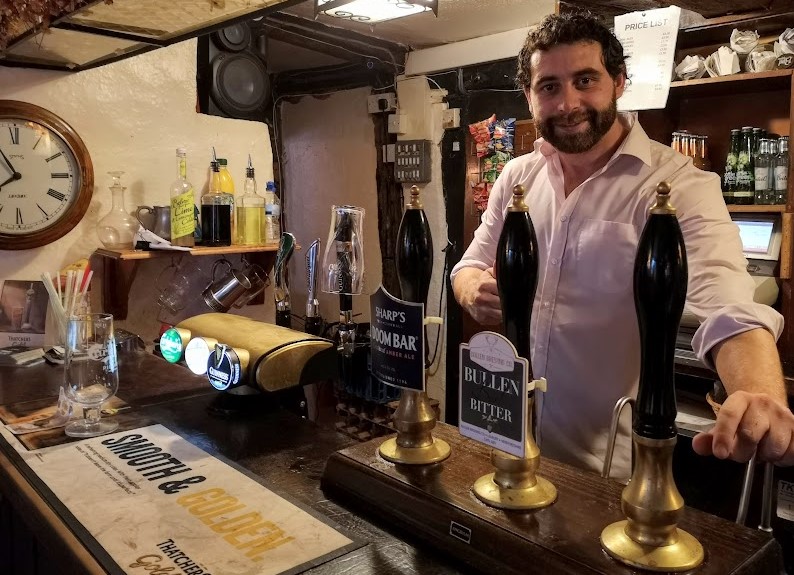 And the loin of pork with calvados sauce was just magnificent. 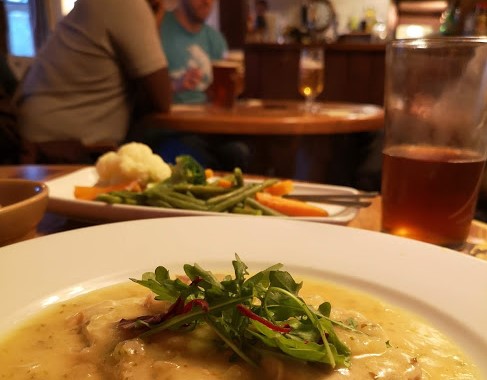 So my first wet day, which could have been thoroughly miserable, turned out to be wonderful because of the kindness and strangers and friends alike.

If this walk is about finding hope and positivity for the future, I found it today.